I believe we are entering a new and uncharted world. A spiritual world some might argue; a world in which answers are needed. And for the first time in modernity, a world in which science cannot provide all the answers.

Recently there seems to be a 'theme' occurring with the books that are falling in my lap; that I am reading and reviewing.

The Enoch Factor, by Brian McSwain, Evolution's Purpose by Steve McIntosh or, A New Earth, by Eckhart Tolle to name a few. In one way or another they all share the similar theme of an evolving universe or our relationship to it. This has led me to revisit and reread Yatri's Unknown Man: The Mysterious Birth of a New Species. 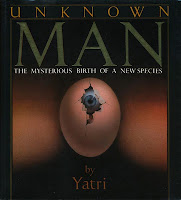 In 1988 I read Unknown Man. Much of it I didn't absorb or retain. What little I can remember was that Man was going to evolve and a new human species (homo novus?) was among us. Twenty-five years later I am reading it again. I think I simply wasn't well enough read or versed to take most of it in at the time. I think this marked the solidified beginning of my spiritual sojourney.

Although it is something I believe, I needed to find some way of rationalizing it (from my own knowledge, experiences, and encounters) without resorting to a supernatural answer - without some sort of belief in 'magic'.

I found my answers in Taoism and my personal encounters with acupuncture and my Qi.

A basic belief of Taoism (and much of Chinese acupuncture) is that the human being is a microcosm of the universe. The living 'life-force' - this Qi - permeates all things living, and flows and ebbs.


"Qi is the energy that underlies everything in the universe. If it is condensed it becomes matter or if refined it becomes spirit...

"Qi is variously called ki in Japan, prana in India and rlun in Tibet. It has been translated in various other ways including 'influences', 'life force', 'breath' or 'vital energy'.

"If you tried to see particles of Qi through a microscope you would not find it, but the restoration of its balance is vital to restore a patient's health. Everything that is living, moving and vibrating does so because this invisible substance moves through it."Angela Hicks, "The Acupuncture Handbook" Piatkus, 2005, pg. 101-102.

Entropy: Everything in the universe seems to move towards this direction. From order to disorder. Things eventually break, wear out, or breakdown. We don't see things fix themselves.

Evolution and Entropy are quite literally the universe's Yin and Yang.

The symbol of Yin and Yang is a beautifully harmonious representation of this flow and ebb and abundance of Qi in the universe, reaching its fullest potential, then transforming into its opposite - like a bellows opening, creating space and filling with air, then closing and collapsing, expelling the air - continually flowing, flexible, and moving.

Qi is simply various forms of energy that flows and ebbs between the two; what allows them to 'move' and 'become'. (Maybe Qi is negative entropy; negentropic energy?)

Qi energy can flow and pass - or a least influence - one another. When or if this occurs and becomes active or 'activated', it will accelerate and amplify.
I believe this action is, or can become, this Noosphere.
This is the next evolutionary step of mankind. (Or from a Taoist point of view, possibly a devolution to return to the Great Integrity - the Tao).

When James Lovelock as asked by NASA in 1964 to figure out a way of detecting life on Mars, he questioned exactly what was life and how would he look for it? His answer?


"I'd look for an entropy reduction, since this must be a general characteristic of life"

The Noosphere is like a bubble, kind of like a force-field protecting those within from the surrounding entropy; a safe-zone where the local entropy has been reduced to zero, or even a deficit.

I know there are a great amount of opinions as to what exactly this Noosphere is or might be. From Vernadsky's to Teilhard's definitions, to the Gaia Hypothesis to a world like that in James Cameron's movie Avatar, even to a planet wide Mind with its synapses being the inter connectivity of the internet.

Many cultures would seem to be aware of it by various names. The Abrahamic Faiths hold onto utopian dreams of Heaven and the past Garden of Eden. Hinduism and Buddhism hold onto Moksha and Nirvana (both being utopian states of mind rather than places), and Taoism has Lao Tzu's perfect moral culture. Even Humanism has the idea that "human beings... can build an enduring citadel of peace and beauty upon this earth" (The World Great Religions, Time Incorporated, New York, 1957).

I'm not sure it's overly important what it might be.
It's not here yet; it's coming. It will be what it will be. It can't (or shouldn't) be forced.