Three Syntheses: A Confession of Faith, of Sorts

Although I am going to present this an an "academic" conclusion I've arrived at, this isn't really the case. It is true, to a degree, that I have "intellectually" worked my way to this point of making some sort of belief or mental assertion. However, the greater truth lies within my own honesty.

We all, as Christians, know the squirrel-answers, those cookie-cutter beliefs we are supposed to, and expected to have. But when I honestly looked past these external expectations, when I stopped my quasi-deception, when I seriously looked into my heart of hearts, this is what I discovered. But I cannot easily nor accurately explain with words that kind of realization. So, if you'll forgive me and allow me to explain it in the context of an intellectual assent, an academic conclusion, I'll continue: 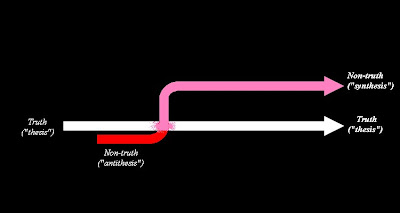 When we add anything to this truth the result can only become a stained version of it's former pures self (as the pure white line turning pink shows). The antithesis added can only yield a synthesis that is not truth.

Okay. Alright, I get it. I understand the concept. If we follow it to it's logical conclusions, the more that is added, or "absorbed", can only lead us on a journey farther and farther from the truth. The more we assimilate and incorporate into what was once pure and white, the more unclear and muddy our perceived truth , our synthesis, becomes.

With this process, it doesn't get better or clearer, it only ever gets worse. Eventually we will find ourselves at a point when we don't know what the truth is. 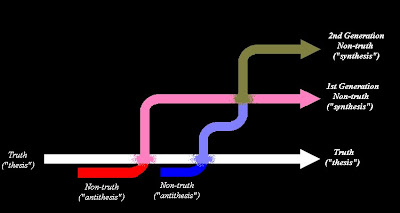 I can't argue with this logic. It has to be be theoretically accurate. But when I look at Protestantism and it's 23,000 denominations (and this number only goes up if we include Roman Catholicism and the Eastern Orthodox) I begin to wonder. This denominational-paradigm works in theory, but fails miserably in practice. How do we come to terms with this? How do I come to terms with this? (Outside of boldly saying that I'm right and everybody else is wrong)?

The denominational-paradigm begins with an assumption; that the whole and complete truth is synonymous with the thesis. As a solution, I had offered a postdenominational-paradigm in which this assumption wasn't made; that the truth (or at least a closer understanding of it) was arrived at only in the synthesis. But the problem is that even this bases itself only an assumption. The only real difference between these two is whether or not we do indeed have in our possession a whole and complete truth.

I like what Irshad Manji said in her book "The Trouble with Islam Today". She said that only God fully understands the truth of anything and that only God can punish the non-believer because only God knows what true belief is.

I agree. And if only God fully understands the truth in anything then only God's truth is synonymous with the thesis. (And by implication our "truths" are all antitheses).

So why the 23,000+ denominations? In a word, Tribalism. We have not overcome our tribal natures. We have, somewhere mixed and half hidden in our mud, the truth. but we are not content with only the truth and contaminate it when we add our subjective versions of our truths and our beliefs either instead of, in condition of, or along side of God's truth.

I believe it when Jesus said He Himself was the Truth, but I don't believe it when we simply assume that carries over and applies to us by necessity when we evoke His name.

I believe that the heretical Jewish Rabbi, Yeshua of Nazareth was - somehow - God limited, but incarnate in flesh. I believe that His crucifixion, death and resurrection somehow healed and made whole and complete the world; that He brought soter to it. But beyond that? Well...

My Confession of Faith is that of , what I'll call, the Three Syntheses. I believe, over the centuries, over the millennia, the truth had been, to some small or large degree, compromised.

I still do believe that any addition to a pure, whole and complete truth can only lead to a muddy and unclear (indeed, veiled) perception of what is and isn't. 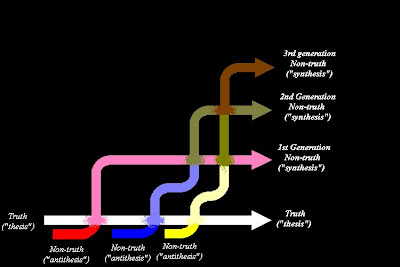 The difference is, I don't believe man ever had it in his possession. I believe that Moses (and by implication, Mosaic Law) was a blend of divinely ordained laws and truths and of man-made laws and "truths".

I believe that the Apostle Paul inadvertently gave birth to a Pauline Christianity. I also believe what Paul spoke of in the epistles was a blend of divinely ordained and inspired laws and truths along side with man-made laws and "truths".

I also believe that God spoke to the Prophet Muhammad. Like it or not, there is truth and wisdom in the Qu'ran. But on the same note, I also believe it's "pure divine truth" has been made unclear and muddied by man's tribalism. 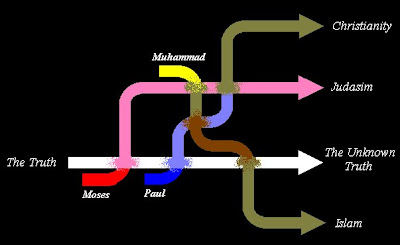 I believe that Moses blended divine truth (thesis) with man-made truth (antithesis) and led to a Mosaic Synthesis and manifested itself as the religion of Judaism.

I believe Paul blended divine truth (thesis) with man-made truth (antithesis) and led to a Pauline Synthesis and manifested itself as the religion of Christianity.

I believe Muhammad blended divine truth (thesis) with man-made truth (antithesis) and led to a Muhammadan Synthesis and manifested itself as the religion of Islam.

I believe in the Three Syntheses.

I also believe there are scripture that supports and confirms these things. Although I am tempted to list them, I won't. It is not my intent to prove my truth, or to make my "tribalism" a necessity.

After "coming to this conclusion" (in truth I think I've believed this for a very long time, I've just now being honest with myself), I realize there are some implications that I'm going to need to explore and work through. I'm not overly interested in people trying to convince me why I'm wrong, or that my "interpretational methods" - my hermeneutics - is faulty. I need an environment which allows me to work through this. I am not nor never have been "religiously" set in my ways, but it is where I find myself. and I need to accept that and work from there. Anything else is simply me lying to myself. I just fear I won't find any help or even allowance in this endeavour; just assault, criticism, or (worse of all) silence.
Posted by 'Seph Sayers at 3:22 AM No comments: