Funny thing meditation. Basically, it is nothing but simply sitting down, doing nothing, and being aware.
By strictest definition, it's nearly pointless. Yet that pointlessness make it a radical act as it totally flies in the face of what the world demands of us. The paradox is that this radical act of stopping, doing nothing, and just being mindful can be the most transformative, healing, and positive thing we could ever do... paying attention.

Only the items I notice shape my mind.
Ultimately, what we allow ourselves to notice literally determines our experiences. Attention determines our degree of awareness with our ordinary experiences and shapes the world around us.

Our level of awareness determines the content and quality of our lives.

There's an old Native American story.
A grandfather tells a story to his grandson, "I have two wolves fighting in my heart. One wolf is vengeful, fearful, envious, resentful, deceitful. The other wolf is loving, compassionate, generous, truthful, and serene."
The grandson asks which wolf will win the fight.
The grandfather answers, "The one I feed." 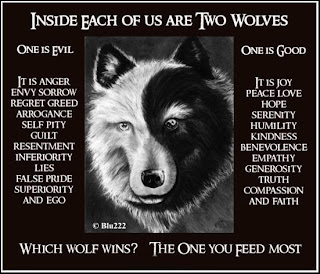 However, if we refuse to deal with or acknowledge what's difficult and painful - ignoring it; pretending it doesn't exist - whatever we neglect withers and retreats below our consciousness, where it may still affect our lives. In a twisted and perverse way, ignoring the painful and the difficult is just another way of feeding the wolf. So it is not only a simple matter of which one we focus on.  Meditation brings us all human experiences and all parts of ourselves - to be aware of both wolves.
Posted by 'Seph Sayers at 5:11 AM No comments:

I believe mankind has within it the potential to make a giant evolutionary leap forward - possible into what some might call the Noosphere - and evolve past our tribal condition. But I think this needs some careful thought and introspection.

All great evolutionary leaps and bounds have typically had a catalyst. There was a time I thought humanity needed that catalyst, that 'push' to abandon tribalism and unify. Movies, TV, literature and culture would teach us that a unified threat would do it; like an alien invasion of Earth for example.
...but this isn't the evolutionary jump we're dealing with here. This is just another - granted larger - definition of 'tribe'.

I suspect that we are instinctively hardwired towards tribalism. It's a survival trait that we need - or possibly - needed.

I'm not convinced we still need it.
Although I am convinced that tribalism is alive and well.

...but what draws us to it? Ultimately I think it is identity and our need for it. We create and build our identity (both personal and corporate) from our 'tribes', don't we? 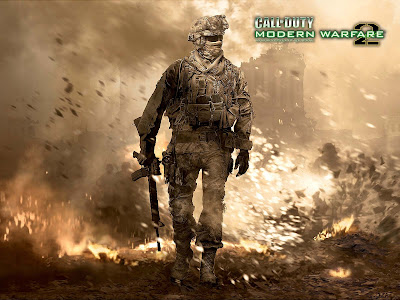 Another popular, fun, and entertaining game is Magic, The Gathering.
We can affiliate ourselves with various fictional groups and guilds: The Azorius Senate, House Dimir, the Gruul Clans - all with their own pins, T-shirts, and paraphernalia should we so choose to engage and associate ourselves with one tribe or another. It's all fun.

Too juvenile for you?  Alright. Let's mature and 'grow up' a little then. What about hockey jerseys? Loyalty to one's sports team, be it hockey, American football (...or baseball... or basketball), or European Soccer. It's odd that the degree of seriousness and fanaticism matures along with its "non-juvenile audience".


It provides us with our need for identity (at least temporarily and superficially).

This isn't restricted to our games and recreation and entertainment only. In fact, the more grown-up or serious or important we can make our tribal corporate identities appear, the more 'real' and important our tribes become. 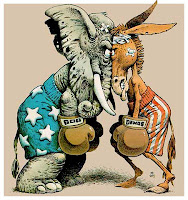 Through my experiences, most people do not clearly, cleanly, or easily belong under one philosophical political umbrella, but bits and pieces of many. It becomes another artificial piece of our identity.

Not serious or mature or grown-up enough? There's still more. Religious affiliations.
Religious affiliation is all about tribal (corporate) identity. ...Yes, most will venomously deny this. They'll claim their religion is about compassion and love, not tribal identity. But Compassion is an evolutionary step away from Tribalism.
True Compassion and Tribal identity are incompatible.
Compassion necessitates charity of some sort as well as selflessness.
Once we begin down that path of giving up a sense (and definition) of Self, so too do we move away from our delusional sense of Ego and begin distancing ourselves from identity.

The compassion that many religions offer is really just pity. Possibly the real compassion is reserved for the exclusivity of its members, like an insurance policy. But conditional compassion - compassion bound by tribal borders - is not compassion.

Our entertainment, our sports, our political views, and religion, and even our work. All these sources of identity that we seek out and cling to only ever reinforce and build the Ego. Our identities are founded on our Fear, Envy, and Delusion.

Envy is Compassion's opposite, for not only does Envy look out for 'number one' (ourselves), it also desires others not to have and to be without. Envy thrives on their failures as well on its success.

Our fearful and envy-driven Ego embraces a Zero-Sum belief or worldview. In order for there to be a winner, there must be a loser. In order for me to succeed, someone must fail. Paying the workforce less makes more profit.
Every source that supports the Ego and builds our identities subscribe to this. Labour Unions are perfect examples of an Envy-based Zero-Sum system.

The Zero-Sum worldview of the Ego cannot fully understand the concept of Compassion. If I give something away with no return, I simply have less and the other gains. (Capitalism/Consumerism is founded against this). I think this is where many institutional religions fail. Although they are attempting to practice and promote Compassion, they are still stuck in their Zero-Sum views. The only logical justification for Compassion and Charity in a Zero-Sum system is a reward in the afterlife (Paradise, Heaven, etc.), but ultimately this only creates self-serving (albeit well hidden) spiritual hedonists*. (You're only doing it for the fair exchange you're hoping to come in the afterlife).

True Compassion only properly functions in a Non-Zero-Sum system. In fact, Compassion embraces it.
Non-Zero-Sum believes that you can have win-win scenarios.
"It's not whether you win or lose, but how you play the game". My success is dependent upon the team's success. Pay and treat the workforce properly and appropriately and the business will profit.
Universal Health Care is a perfect example. Yes, through taxes, the wealthier will pay to support the less wealthy worker, but a stable and healthy workforce benefits the entire system. There are no losers in this system. This is Non-Zero-Sum.

I think religions functioning within a Zero-Sum worldview had limited potential but was the best we could hope for in its day and age. But I wonder if we are on a spiritual cusp; at the verge of entering a Non-Zero-Sum worldview.

What happens, spiritually, when we decide to abandon our religious identities?
What does this look like? What does that make us become? Could this be this elusive Kingdom of God that Yeshua speaks of? Could this be the clean and clear mind of Enlightenment the Buddha teaches we are already in possession of?
Why are we so driven to find and establish our alleged identities?
Could this very act be what blinds us all?


*(On a side note, I think this is where Paul and Yeshua may differ. I believe the Kingdom of God that Yeshua refers to ("One day the Pharisees asked Jesus, "When will the Kingdom of God come?" Jesus replied, "The Kingdom of God can't be detected by visible signs. You won't be able to say, "Here it is!" or "It's over there!" For the Kingdom of God is within you". Luke 17:20-21, NLT) is a corporate entity that embraces Non-Zero-Sum thinking, while Paul - for all his good intentions - was stuck attempting to understand this Kingdom of God through his Zero-Sum perspective ("I press on to reach the end of the race and receive the heavenly prize for which God, through Christ Jesus, is calling us." Phil. 3:14, NLT).
Posted by 'Seph Sayers at 2:42 AM No comments: 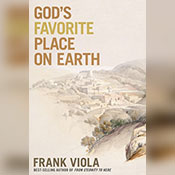 Allow me to apologize in advance. This short book review is more about me than the book itself. I have often wondered, as a non-Christian (or maybe an ex-Christian... or maybe I never really was a Christian... Good God! maybe the Calvinists were right!), why do I write book reviews of Christian books? And why do book authors and Christian book publishers want my opinions, and why are people (or Christians) interested in my non-Christian thoughts?

Well, ultimately, I think I know why. I may be a non-Christian but I have not totally abandoned everything Christianity has of value. I would rather not define myself as a non-Christian or an ex-Christian, but as simply having moved beyond Christianity (and that necessitates keeping or absorbing at least some aspects and values of it). And that gives me a somewhat clearer vision of what I see, hear, and read.

Christian books in the past that have received bad or poor reviews from me generally have certain unfavourable elements. They use bait-and-switch trickery and mislead; they are too preachy and condemning or judgmental; sometimes they simply can't connect to the common man.

This book however - "God's Favorite Place on Earth" - is none of these things. The author starts out by comparing the tiny town of Bethany to the colossus Jerusalem. I believe the messages and lessons Frank Viola is attempting to communicate are good, simple Christian ones (mind you, for the internal Church-going Christian; not those on the fringe)... but he never seems to get any traction. He failed to ever grab my attention or interest. Although not a long book, I read through it like it was a task, an obligation. (It was as joyous as reading through the book of Leviticus).

I wish I could say or comment more, but unfortunately I have little more to add. It simply wasn't an engaging book.