John Hick: God Has Many Names

According to John Hick, the reason God has many names is that since God's general revelation is revealed to everyone the world's religions sprang up as different responses to the divine reality, embodying different perceptions which have been formed in different cultural and historical circumstances. All of these perceptions have their strengths and weaknesses and when they are in dialogue they can learn from one another.

There is a difference between a world religion and an world theology. Hick (like the Dalai Lama) doesn't advocate the abandonment of the religion of your youth in favor of a one universal religion where everyone worships pretty much the same. He does advocate for a theology that interprets religious experience within Christianity as well as in the other "great streams of religious life." These would include non-theistic religions of hinduism, buddhism and even Marxism and Humanism.

Karl Rahner's idea of the "anonymous Christian" is that there are members of other religions to whom Christ has been revealed and so they are saved. The common criticism of this idea is that nothing is stopping anyone from calling Christians "anonymous Buddhists" or "anonymous Muslims." Hick abandons the idea of the anonymous Christian and says that all religions can be viewed as equally salvific if you understand Jesus being God as a metaphor. He says Jesus never taught that he was God. Others referred to Jesus as God because he lived in complete openness to God's Agape love. Since God is love this is kind of the same as saying something like, "Steve Jobs is geek chic incarnate." He says, "Agape is incarnated in human life whenever someone acts in selfless love." I think this is what it comes down to for Hick, as far as we act in self-giving love God is made incarnate in us also.

John Hick speaks of a Copernican revolution in religion. Early astronomers believed all the celestial objects revolved around the Earth. After they started observing these objects in more detail they realized they don't move in perfect concentric circles around the earth. They decided that celestial objects must move in other orbits while ultimately orbiting the Earth. They called these additional orbits "epicycles." In trying to describe the epicycles they become more and more complex until someone (Copernicus) dared to say that maybe all the celestial objects don't revolve around us, maybe they revolve around the Sun. This got him into lots of trouble.

Email ThisBlogThis!Share to TwitterShare to FacebookShare to Pinterest
Labels: Pluralism

Claims, or doctrines, such as Papal Infallibility are prime examples of Dogmatic Theological Methods - or circular thinking. They are self-authorizing and self-asserting “proofs”, and therefore cannot be challenged or questioned.

Biblical Inerrency is another good example of this. What becomes interesting is that the more Problematic Theology evolves, the more epicyclic Dogmatic Theology grows in response.

I like the word “epicycle” because it reminds me of the epicycles needed to add to the Ptolemaic view of the universe to accurately maintain the earth as it's center.

The paths of the planets and the sun and the stars were all to orbit around the earth. But as the planet's and sun's paths became better known, they didn't match this Ptolemaic view. So to resolve this discrepancy, epicycles were added – a series of smaller orbits, revolving with their centers on their original larger circle, or orbit. If the planet could be imagined moving on one of these smaller circles, while still following its original orbit, the actual path more complex and significantly closer to what was empirically observed.

It would be like two computers talking with one another and deciding to explore the question of how Artificial Computer Intelligence came to be, but, before starting this discussion agreeing that the answer simply could not be a human being.

The same may be said of a group of atheistic scientists attempting to discover the origins of life, but agreeing on the onset that the answer absolutely cannot be supernatural or God. (One of the reasons why I hold so much respect and admiration for Stephen Hawking. He is definitely a Copernican thinker), even if the evidence leads in that direction.

...maybe this is an all too intellectual way of attempting to describe what Problematic Theology, or a Copernican Christian is. Sometimes I've found that satire - comedy - humour is another effective way. The following comic strip particularly jumped out at me. (Especially when we understand "bullshit" more along the lines of what Harry Frankfurt means in his piece On Bullshit) 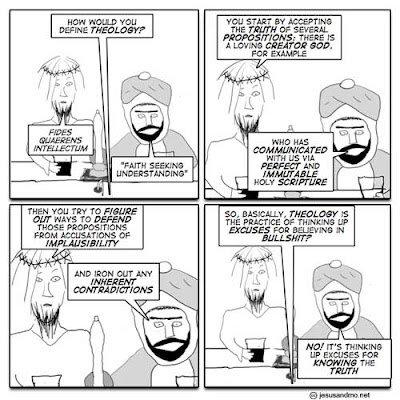 I suppose what is important is that we take an honest look at ourselves, at our beliefs, at our "theologies", and being willing to ask the question some of these questions...
Posted by 'Seph Sayers at 2:43 AM No comments: