Allow me to begin by saying, many of the pitfalls and criticisms present in John Crowder's previous book – Mystical Union – are present in Seven Spirits Burning as well.

Poor editing and/or grammar, contradictions, use of 26 biblical translations (which, ultimately, must be better than the 48 used in Mystical Union). John Crowder tends to fall victim to speaking in Christianese; words and terms that only Christians or church-goers would readily identify and recognized, yet terms that are mostly ambiguous and undefined; possibly with intent to deliberately allow the reader to assume. 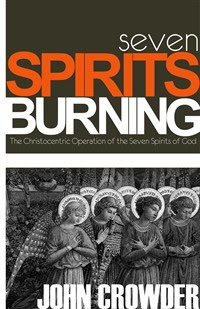 The book, primarily, is about the Holy Spirit. Early on Crowder begins by, what I can only assume to establishing that Holy Spirit (he tends not to use the term the Holy Spirit, but truncates it down to a proper noun - Holy Spirit) is indeed God and not some sort of impersonal force.

“Furthermore, He is eternal, omnipresent – existing everywhere – and He is omniscient – knows everything (1 Cor. 2:10, 11; Ps. 139:7-10). Scripture is clear that He was involved in the creation of the world, along with the Father and the Son. He brought life to mankind as He was exhaled by the Father”. pg. 14-15

If we are going to lay-out the 'properties' of the Holy Spirit – establish Holy Spirit's nature, if you will – then let's go all the way, shall we?

Let's list Proverbs 8:12-30 (which I think may be the reference Crowder is making in the final two quoted sentences). And if this is the case, let's address the fact that this Sophia - God's personified Wisdom – is female.


If we are to provide biblical quotes and support to establish that Holy Spirit is indeed omnipotent, omnipresent, omniscient, and has a personality and an individuality as Crowder so seems inclined to do, why not quote Wisdom of Solomon (or Book of Wisdom) 7:23 and 7:27? They are perfect examples.

Oh, but wait! I know why. Wisdom of Solomon is an apocryphal book, belonging to the Catholic Bible.
And here is what John Crowder has to say about that:


“When we count up all of the various almond parts of the lampstand – flowers, buds, blossoms, etc. - we find a total of sixty-six parts. Did you know that there are sixty six books in your Bible? This is an ancient confirmation of the canon of scripture”. pg. 44.

[So, Jeremiah 1:11-12 is to become the infallible bible's Table of Contents? The historical fact of the matter is that the 66 books were established by a Church Council. Whether or not this council was divinely inspired is up for debate].


“Never let anyone try to convince you that religious leaders suppressed other books of the Bible, or that apocryphal works hold the same weight of authority as the canon of scripture. Some apocryphal works are helpful, but they are not infallible...” pg. 45

But yet, shortly afterwards while attempting to convince the reader that the power – the Glory - of Holy Spirit will enrich and fill the believer to overflowing, he quotes Psalms 65:11.... four times over.

All from various biblical translations/versions; including the Catholic NAB (New American Bible).


This quote from page 54 completely flabbergasted me!

I can't help but think of Vladimir Lenin, Adolf Hitler, and Joseph Goebbels. What was that quote again?

”A lie repeated often enough becomes the truth”.
I am not necessarily accusing John Crowder of attempting to drive a blatant lie down our throats, but commenting of the methodology employed.
In short, Propaganda... and it is at this point that I feel John Crowder has crossed a line.
He strikes me as hypocritical and double-dealing.


It should be noted that out of the hundreds (thousands?) of books I have read over the decades, whether for review, theology, fiction, casual reading, or whatnot, I can honestly count on one hand, with fingers to spare, how many books I've chosen not to finish. John Crowder's Seven Spirits Burning is one of them. I am going to write and post this book review having not read past page 54.

I see no point.

What little degree of trust I held for the author is now gone.

Disclaimer: I received this book free from SpeakEasy Blog Network. Providing me a free copy in no way guarantees a favorable review. The opinions expressed in this review are my own.
Posted by 'Seph Sayers at 9:17 AM

Judge a book by it's cover, admit you didn't finish it, then write a review of what you didn't read.

Comparing someone to Hitler is the epitome of intellectual laziness.

In all of Crowder's books, he acknowledges the validity and inspiration of many apocryphal books. That doesn't mean he considers them INFALLIBLE canon.

You're the pot calling the kettle black and obviously on the anti-Crowder train despite any valid reason for it.

I can fully understand you concern.

However, it wasn't that I didn't finish the book, but rather that I refused to continue reading it. There is a difference.

I can honest say I didn't judge this book by its cover - as you put it - having read and reviewed his previous book, Mystical Union.

I didn't compare Crowder to Hilter but rather one of his methodologies.

You are more than entitled to have your own thoughts and opinions on the writings of John Crowder.

Your and my opinions do not have to agree.

I'm sorry you feel this way about my opinions and my two book reviews of Crowder's work.
Clearly you're a fan and I've offended you, and for that I do apologize.
However, I will not apologize for my own thoughts, insights, opinions, and review of this book.