A friend, and significant spiritual influence, of mine recently began asking questions of some old posts/ideas of mine. 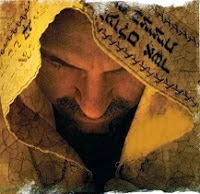 The final question asked in The Christian Criterion: Lines of Division was, what exactly was the core teachings of Jesus.
I think this links itself to a much older question I once posed in Repairing the Torn Veil. 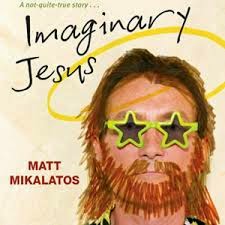 You really cannot make the claim of being an adherent to the teaching of Jesus without having a clear definition - and understanding - of exactly what it was that he taught. (And as the lesson of Matt Mikalatos' Imaginary Jesus hopefully has taught us, we are extremely subjective when it comes to this issue).

If we look at the four gospels exclusively (I want to keep this simple) what we see is a man performing miracles, and miracles occurring around this same man. (This is an important distinction).
I hope we can agree that - at the least - he was a great wisdom teacher.

I don't want to get bogged down into the arguments of whether he was divine or an incarnation of God, or the unique Son of God. I think this is missing the point, and if this becomes the main point, I believe we've totally lost our way.

I want to strip this down to the bare bones. I think we can agree, as a lowest common denominator, that he was at least a great wisdom teacher.

He taught through parables (and let's remember, the parables were a teaching tool, not the teaching itself). He taught (sometimes) through example, and he taught (or the recorders of these events) taught through symbolism.
But what did he teach?

From the context of Old Testament Judaism - he was Jewish and he was a rabbi - maybe a heretical one - but a rabbi never-the-less.
This cannot be ignored and this cannot be viewed through the modern day Christian lens.

I think some very common and fundamental terms need to be reviewed here.
The concept of "Holy", "Sin", "Sheol" (Hades?), Hell's prototype Gehenna, and even the afterlife to name a few.


"In the Hebrew Bible there is no eternal afterlife, only the survial of your name/culture/nephesh (meaning breath, life-force, spirit) through children. This is why we have the commandment to honor your mother and father; because by ignoring or forsaking them you effectively put a permanent end to their identity and heritage. Barrenness, the inability to conceive a child, meant a couple's total extinction, eradication from history." J. Snodgrass, "Genesis and the Rise of Civilization", pg. 135

The Old Testament held little to no concept of an Afterlife. Certainly nothing like modern day Christianity does.

It was an unclear, fuzzy idea at best. They held the idea of Sheol, an abode of the dead. Not a Hell of Eternal Conscious Torment, or even of suffering. Both the righteous and the morally corrupt went to Sheol. There was no moral judgement.
In fact, the concept of Sheol was very similar to the Greek concept of Hades. These were not Hell.
In Edward W. Fudge's "The Fire That Consumes", chapter 6, section "Sheol in the Old Testament" (pg. 81-82) we see this fleshed out in detail.

Even Hell's prototype, Gehenna, wasn't the Hell of Eternal Conscious Torment either.


"It is fair to say... Gehenna would convey a sense of total horror and disgust. Beyond that, however, one must speak with extreme caution.

"It is commonly said that Gehenna served as Jerusalem's garbage dump, "a necessary hygienic incinerator outside the walls"... Here the fires burned day and night, destroying garbage and purifying the atmosphere... In times of war the carcasses of vanquished enemies might mingle with the refuse... they were destined to be destroyed in the fires that were never quenched". Edward W. Fudge's "The Fire That Consumes", pg. 161-162

What we see is a reference to a very real geographical location anyone listening to the story would readily know of. No different to the local dump just outside my city. I know where it is. I know what it is. I could even go there and see it if I wanted to.
It was a parable and teaching tool that took on a life of its own and seems to have became something it was never intended to be.

Again, viewed through the lens and context of Old Testament Judaism, we do not find any sort of Hell of Fire and Brimstone and judgement.

...and what of the Holy and the Sinful?


"...we must be very cautious about assuming we know what "Sin" means in this context, or in any." J. Snodgrass, "Genesis and the Rise of Civilization", pg. 157

Too often, we have been told/taught that Sin is somehow linked or associated with sex or desire or the like.


"The Sodom story is sometimes read as a "proof text" against homosexuality. But what these men are proposing is not consensual gay sex, it's gang-rape: forcefully and deliberately tearing away someone's dignity. Sex is not the crime they're punished for - the crime is abusing a guest

"The "sin" of Sodom is not sodomy, it's inhospitality." J. Snodgrass, "Genesis and the Rise of Civilization", pg. 158

But I think it's Marc Gafni who puts its clearest and best,


"In the original, "to sin" does not mean to be bad. It means literally to miss the mark... To sin is to miss the mark, to not properly understand the nature of reality. Sin is a form of ignorance, a false or partial relationship to reality." Marc Gafni, "Your Unique Self: The Radical Path to Personal Enlightenment", pg. 24-25

And this comes from somewhere and leads to something.


"We shape our God, and then our God shapes us... [if] that God is angry, demanding, a slave driver, and so that God's religion becomes a system of sin management" Rob Bell, "Love Wins" pg. 183

"Sin", from its original context, meant to miss the mark. Not to be morally corrupt or 'bad'.

It is interesting to note that what we today define as “holy” is absolutely not as the Hebrews defined it. The Hebrew word of holy is kaddosh, which does not mean a state of moral perfection nor has anything to do with morality. It means “otherness”, not natural, but supernatural, not of this world, but alien.
Not in the tribal sense of not of our tribe (an outsider), but something so unlike us as to be near incomprehensible.

When we see "Holy", "Sin", "Hell" through this lens, we seriously need to question what Jesus' teaching(s) were. Heaven, Hell, Salvation, all change meanings or become moot.


"Jesus is bigger than any one religion. 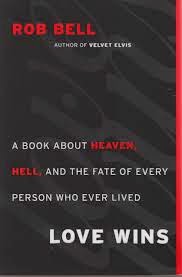 "He didn't come to start a new religion, and he continually disrupted whatever conventions or systems or establishments that existed in his day. He will always transcend whatever cages and labels are created to contain and name him, especially the one called "Christianity"

"Jesus is supracultural.He is present within all cultures and yet outside of all cultures.He is for all people,and yet he refuses to be con-opted or owned by any one culture.That includes any Christian culture. Any denomination. Any church. Any theological system." Rob Bell, "Love Wins", pg. 150-151

The symbolism - whether enacted by Jesus himself or whomever recorded/penned the story - of the tearing of the veil is, in all likelihood, the singular most important lesson in his entire teachings - maybe even superseding the crucifixion and resurrection.


"Everyone agrees: we need to wake up... In what way are we asleep, and consequently, in what way do we need to wake up? Each stream of culture, including psychology, spirituality, evolutionary theory and more, answers this question differently... no major stream of knowing is smart enough to be entirely wrong...each claim... is true, but partial... The problem starts when a partial claim to truth claims to be the whole story. When parts pretend to be wholes... the result is cancer in the body or body politic." Marc Gafni, "Your Unique Self", pg. 44 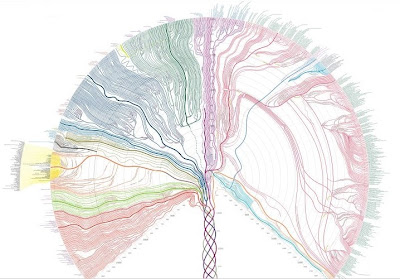 It's morning one.
I'm on a 12-day Mediterranean cruise.
I have found myself a somewhat secluded spot on the uppermost sports deck - 13 stories high - to sit on my seiza bench and mediate.

Everybody's asleep. Apart from the occasional early morning jogger, I am alone.
That's good.
No potential audience.
More importantly; no private concern of an audience.

Normally when meditating it doesn't take long for phosphene to begin.
This time it's different.
Although I'm sitting on the shadowed side of the ship, there's light everywhere!
I can't help but be aware of the sea breeze that ruffles my clothing and caresses and messes my hair. My mind is easily distracted, easily reminded of exactly where I am; reminded to a point where it's difficult to do what I'm doing - namely, meditate.

On retrospect, I question whether I should have been forgetting where I was and 'filtering out' the environment I'm surrounded by (as it is a distraction)... but this is a problem on multiple levels, isn't it?


The moment I'm aware of what I've forgotten,
is the moment I've remembered.

How could mindfulness function in this scenario? I could only accomplish this in retrospect.
But a more serious challenge is the very question of forgetting. Is an oblivious state of mindlessness really what I'm striving for? No. Shouldn't mindfulness include being acutely aware of the environment you're in?

This is a paradox when this very awareness is a distraction from the practice itself. (When being mindful take away from practicing mindfulness).

Although I couldn't put my finger on it, I became acutely aware of a flaw in my practice and my understanding... but I had time for reflection.

I think the answer may lie in a closer look at the (my) meditation practice of Jung-Joong-Dong.

The Jung-Joong-Dong as described in General Choi's Jungshin Sooyang (Part II: Section M: "Develop Peace of Mind) is extremely ambiguous. The point of Jung-Joong-Dong seems somewhat confused or hidden.
Upon initial inspection or study, it would seem that this Master confuses meditation and contemplation, or uses them interchangeably or synonymously - at least that's what I initially thought.

But if you dig a little deeper, I believe he means to use them in some sort of holistic and intrinsic way.

The initial point of Jung-Joong-Dong is to strive for Clear Mind.
Although it may be implied or suggested, the method or practice of how are secondary and could even prove to be a distraction (How isn't really important at all).

To quiet the mind (no small feat!) will allow it to settle, like muddy water settles, to become clear (or even return to its original state). Only when we can quiet the mind can we begin to have Clear Mind.

But Clear Mind is not the goal, only a means to an end.

We are meant to have Clear Mind so that we may practice contemplation, or self-reflection. However, attempting to practice self-reflection without the lens of Clear Mind can only promote and lead to Delusion (and if we follow this path to its final conclusion, also fear, envy, victimhood, jealousy, and hatred).

Jung-Joong-Dong two-fold 'steps' are meant to function holistically; meditation and contemplation are kit-and-kaboodle.

Within meditation we quiet the mind and have Clear Mind. Within contemplation we have self-reflection, self-improvement and eventually Solace. Mindfulness acts as the link and bridge between these two.

The apparent paradox of being mindful during meditation as distracting form Mindfulness itself is an illusion.

I realize it may sound like I'm talking a lot of gobbly-goop (I hope not) and maybe even over-analyzing it, but this isn't a well established form of meditation, and I'm pursuing this more-or-less on my own. To my knowledge there are no teachers of this obscure form of Martial-art meditation.

It is definitely an uphill battle.