Continued from I Don't Know Where My Mind's At...

[For the time being we're going to assume and explore the potentials of the possibility of our minds not being housed within our brains. We are also going to assume that the human brain functions mostly like a radio or an antenna, tuning into a frequency that is our (external) mind.]

Firstly, if the mind is external, like a guitar string vibrating down the corridor of time (an expression that might be more accurate that I originally thought), our Antenna-brains are tuning into its vibrations but not the original "guitar-string" itself; not the originating Source-Mind, but its waves.

I think I had inadvertently described it very well: "A guitar string vibrating down the corridor of time".

It would indeed be a corridor of sorts in the sense that it would be bound by 'walls', or barriers. 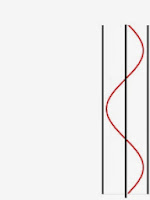 Something that divides and separates it from us - or more specifically - our reality. A different reality or dimension. (I'd like to call it 'branes' (as in membranes) but it'll cause far too much confusion between 'branes' and 'brains').  Possibly Planes of Existence. 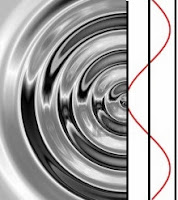 The details matter little at this point. What matters is when the waves of vibrations coming off the Source-Mind come into 'contact' with these 'walls' the effect might be similar to ripples in a pond.

(Now remember, we're dealing with a time-space continuum. These 'ripples' would permeate the entire continuum which could produce a frequency that would inundate everything, everywhere).

There could be some interesting properties; particularly how our minds perceive and function in time. 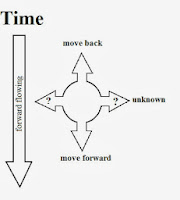 On a timeline, to move forwards or (hypothetically) backwards is to move, or travel, forward or backwards in time. It's never been clear what a lateral move would be.


Could these vibrations actually be lateral movements in time?


If we look at these vibrations from the Source-Mind as ripples in a pond, and the brain as an antenna sensitive to their frequencies, then it would be possible to be aware of both future and past events. 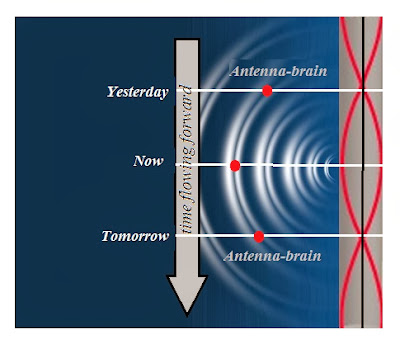 On the assumption the external mind is true, it poses some interesting questions:

Could this explain premonitions, prophecies, deja-vu, synchronicity and similar phenomenon?
Could it explain (real) psychics and psychic-like abilities?
Could an echo, a vibration from a source-mind exist and be perceivable as a ghost?


(To be continued on "The Source-Mind: g0d's Atheistic Nature")
Posted by 'Seph Sayers at 6:47 AM No comments:

I Don't Know Where My Mind's At 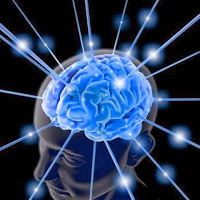 Most modern science/medicine tend to see the human brain as a sort of wet computer (possibly a super-computer). Many features of the brain remain a mystery, or at least as of yet unsolved. One such aspect is that of consciousness, sentience, or the mind. "Where" is the mind housed in the brain? What physical aspects of the brain control the mind? Does the brain produce a mind? 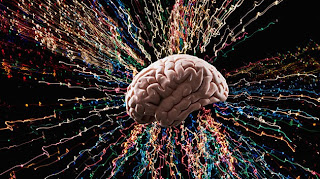 However, there is another theory growing in popularity out there.
Although certain aspects of the brain do indeed function like a computer, the brain itself does not house the mind. In this aspect, the brain is less like a computer and more like a radio, or possibly an antenna. It "tunes in" to the frequency that is the mind.

The implications are far reaching. This theory would necessitate that our minds are somewhere 'out there'; or at least outside our bodies. It also means that the mind may function like (or actually be) a wave.

We could run wild with this theory.
Could a different brain tune in to the frequency of another mind? Could this be telepathy? Could it explain those moments of deja vu?

Could the mind be like a vibrating guitar string through time, our brain tuning into the frequency of its vibration? If so, wouldn't what we perceive as our self (our mind, our ego) actually only be an echo of the true mind?

Or is it possible that there is only one true mind and all of our billions of brains tune in and produce various interpretations of it? We're all different reflections of the same original source; and wouldn't that make us all - somehow - interconnected?

What happens when our bodies (our brains) die, especially if the mind is not housed there?

What are we truly?
Our physical bodies/brains, or the external mind?
Are we only an expression of this mind we're tuning into?

...to be continued on "Our Antenna-brain and the Source-Mind"...
Posted by 'Seph Sayers at 3:42 AM No comments:

When injustice is committed, a sense of justice must be appeased.


"Peace is not merely the absence of war, but the presence of justice". Albert Einstein

Firstly, let's be clear here that I am not speaking of legal justice, or a justice system itself. I am speaking of injustice on a personal level. How we cope and struggle with it ourselves.

But what is this "justice"? Is it discipline or punishment, or both? Is it retribution or revenge? Exactly what brings an individual who's suffered injustice solace? 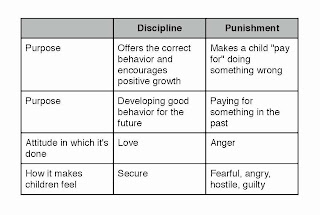 Do these things truly bring us peace, or only hold up a mirror to our souls?

Is the desire for punishment indicative of the hatred in our hearts; a longing for revenge?
Could the goal of discipline be a sign of altruistic love and compassion?


Do we really want that choice within our hands? I think the nature of justice (disciplinary or punitive) can lie within the guilty party, if we allow it to, freeing ourselves of that burden. Not in the sense of abandoning our responsibilities, but questioning the guilty party's motives and intentions. Is it my place to question if there are demons to battle if they aren't mine? And if there are no demons to battle, my questioning creates my own.

Ultimately, the question is whether the individual who inflicts injustice is capable of escaping their own state of confusion (delusion) and begin to learn.

If not, then they remain in a state of delusion ('they're not guilty') and thus suffer ('punishment') - possibly feeling injustice has inflicted upon them.

If they can find a way out of their denial or delusion, then they have the potential for growth and have hopes to learn ('discipline').

In this scenario it is in the perpetrator's hands as to whether justice serves punishment or discipline, not the victim's. In this way we can be free of the burden of their guilt and their conflict.

Our Own Worst Critics

I can clearly remember the day! No, the moment.
It must have been decades ago. I was sitting in my friends' backyard having a beer on a beautiful summer afternoon. Their backdoor exited into a block concrete "patio". Patio's not really what it was. It was big enough to have a BBQ, but that's it. It had painted black metal railings and concrete steps that led down to their grassy backyard - where I was sitting. Two garden homes shared this concrete stepped exit.

As I sat and sipped my beer I watched their neighbour's young son playing and climbing on the patio/steps. He wore only a diaper.

He hung his legs over the concrete edge, in an attempt to climb off the ledge rather than use the steps, but his legs weren't long enough to reach the ground.

Totally disconnected from the scene - and apparently indifferent - I simply watched. I knew what was coming. The weight of the boy's legs would drag him over the edge, he would painfully scrape his soft belly on the rough concrete edge, and he would cry.

I sat - detached - and watched my prediction play out like a premonition.

I didn't intervene. I simply observed. There was a great sense of calm in me... which was peculiar.

I remember that moment so well because it was that incident that convinced me, all those years ago, that I lacked compassion.

But the part that never made sense to me was my profound sense of calm and being at peace.

It has only been very recently, in this past year, when I 'reconnected' to this memory. I recognized the person in the memory, where I don't think I have ever recognized that person before.
Maybe because I've only recently been introduced to this person through my practice of meditation.

That aspect of me that is simply aware. That part of me that watches. In meditation he (it?) is that which observers the thoughts. He is always calm and serene.

Although I could never have recognized him all those years ago, I believe that is who he was. On that day, I had a lucid (traditionally non-meditative) moment.

This is important because that same moment was when I had judged and condemned myself as lacking compassion. It had shaped my perspective of myself every since.

It's odd how a condemnation like this can steal your permission to grow, isn't it?

I'm not convinced that I lack compassion. Sure, I can work on my compassion more, and I have my moments when I can be insensitive and self-serving... but we all have these dark moments.

Had The Watcher not been 'dominant' and 'in control', I've no doubt I would have lunged forward and caught the child.

I suppose the lesson here is that we must be compassionate and forgiving to ourselves at times.

This may seem like an unimportant or petty story, but its ramifications to me are significant.

I believe compassion and solace are intrinsically entangled through dharma. (The Dharma Entanglement)... and if I allow myself to believe I am devoid and hopeless in one of these 'traits'... only serves as a barrier and an obstacle.