Today, Envy and Jealousy have become synonymous in the English language, with Jealousy taking on and incorporating Envy's definitions. However, they are different and this Envy needs to be properly understood.

This Envy is two (or three) parted.
Firstly, it is when one can justify why they deserve what another has (including the protectionism of  jealousy), and why they don't have it (victimhood). 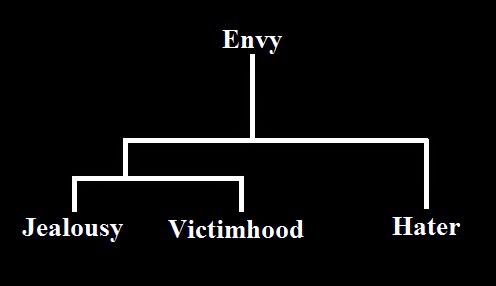 Secondly, is it when you can justify why another doesn't deserve what they have, and encompasses becoming a "hater" - not necessarily wanting what another has, but wanting them to suffer; stealing their joy from it.
This coincides with what Bertrand Russell has said, that envy was one of the most potent causes of unhappiness. Not only is the envious person rendered unhappy by his envy, but they also wish to inflict misfortune on others.

I think this is the most dangerous aspect of Envy, both for the target of it and the individual suffering from it. Maybe the term "hater" needs to be clearly defined:


Hater (n):
A person that simply cannot be happy for another person's success. Instead of giving acknowledgement in courtesy, a hater often pursues his/her point by exposing a flaw in the target subject. Hating, the result of being a hater, is not exactly jealousy. The hater doesn't really want to be the person he or she hates, rather the hater wants to knock someone down a notch.

There is another dangerous position somewhere between the entrapment of Envy and the freedom of Compassion; a mock-compassion. A half-assed compassion.
It is a deluded version of compassion; Pity.
It is easy to mistaken Pity for Compassion; and there is nothing wrong with feeling Pity. It is only wrong and dangerous when you delude yourself into believing your Pity is your Compassion.
(I would argue that an individual who is tribal - rather than communal - is, at best, only capable of Pity. I would also argue that most institutional built religions (the entity itself, not necessarily the people in it) are all tribal in nature).

It isn't enough that we properly understand what this Envy is, but that we can identify it within ourselves, and, hopefully, purge it.