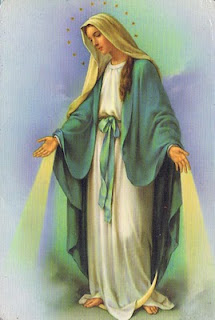 Most images and statues of the Virgin Mary depict her wearing a light sky-blue robe or veil sometimes with yellow or gold trim or other clothing accents. Why is that? Is there any scriptural evidence to confirm this? No. Is there any historical reasoning or likelihood of this? Where does this image come from?

In much of the paintings from the Middle Ages, especially the Gothic Art, this pattern is present. Cimabue’s Madonna Enthroned (c. 1280-90 AD) has Mary wearing a dark blue robe, or shawl and a red or orange gown beneath. 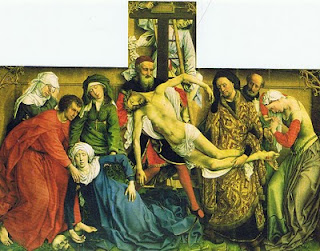 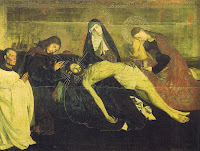 In Fra Angelico’s The Annunciation (c. 1440-50 AD) Mary is dressed in white and dark blue with golden trim. Domenico Veneziano’s Madonna and Child with Saints (c. 1455 AD) has Mary in a light red or pink gown covered with a gold trimmed blue robe or cloak. In Giovanno Bellini’s 1505 AD Madonna and Saints Mary is dressed in white, red, green, and again, a blue cloak or robe.

Mary is wearing a red gown and covered in a blue robe in Raphael’s Madonna Del Granduca (c. 1505 AD). And in Titian’s Madonna with Members of the Pesaro Family ( 1526 AD) she is robed predominantly in red with a white shawl, but there is still present a blue cloak or robe or article of clothing.

And finally, in Parmigianino’s The Madonna with the Long Neck (c. 1535 AD) she is pictured in white and wearing a blue cloak or shawl.
“There are two other kingdoms. Sophia, because of her special duty to redeem the Earthly Cosmos, resides in a kingdom which is at an intermediate stage between her emanation and those of her Father. This is made up of inner blue darkness and outer yellow light. (In pictorial representations, Sophia is often shown wearing a blue gown edged with yellow which signifies her status as the queen of heaven; a status also occupied by Mary, the mother of Jesus).”  Bernard Simon, The Essence of the Gnostics, pg. 144

This certain aspect of the Gnostics has inundated itself within our modern day traditions and beliefs. The Gnostic’s goddess Sophia (or Wisdom) is a divine emanation of God the Father. The picture to the upper left is from a fridge magnet that I picked up on a trip to Quebec City. Yes, I would venture so far as to say that this would be a predominantly Catholic image, and yes, the Virgin Mary is a significant Catholic icon. However this cannot be so easily written off. To the left is picture is from my daughter’s NIrV Story Bible for Children. Being a New International Revised Version does not mean a Catholic bible nor Catholic images. The picture in this picture bible portrays Mary once again dressed in sky-blue and yellow.
Is this truly a Gnostic influence within our midst? Can we simply state that, yes, this image may have slipped into mainstream Christianity but has no significance and cannot - should not - be taken seriously? Yes, I’m sure it is quite easy to dig through Gnostic texts and scripture and to find this image of Sophia, but Gnostic texts and scripture are not canon, right? There was a reason they did not make it into the canon, right?
What about the words of King Solomon? Proverbs 8:12-30 (a canonized book I might add) makes a very serious statement:

"I, wisdom, dwell together with prudence;

I possess knowledge and discretion. To fear the LORD is to hate evil; I hate pride and arrogance, evil behavior and perverse speech. Counsel and sound judgment are mine; I have understanding and power. By me kings reign and rulers make laws that are just; by me princes govern, and all nobles who rule on earth. I love those who love me, and those who seek me find me. With me are riches and honor, enduring wealth and prosperity. My fruit is better than fine gold; what I yield surpasses choice silver. I walk in the way of righteousness, along the paths of justice, bestowing wealth on those who love me and making their treasuries full.
"The LORD brought me forth as the first of his works, before his deeds of old; I was appointed from eternity, from the beginning, before the world began. When there were no oceans, I was given birth, when there were no springs abounding with water; before the mountains were settled in place, before the hills, I was given birth, before he made the earth or its fields or any of the dust of the world. I was there when he set the heavens in place, when he marked out the horizon on the face of the deep, when he established the clouds above and fixed securely the fountains of the deep, when he gave the sea its boundary so the waters would not overstep his command, and when he marked out the foundations of the earth. Then I was the craftsman at his side. I was filled with delight day after day, rejoicing always in his presence."  Proverbs 8:12-30 NIV

Proverbs 8:12 identifies the speaker as “I, wisdom”. Sophia is a translation of the word wisdom. Could “wisdom” have been the “us” referred to in Gen.1:26, “Let us make man in our own image.”? Is this to say that there was a “pre-creation” to the Genesis account? Could “wisdom” (she) be the Holy Spirit? Could this potentially be God the Mother aspect of the Trinity? The following two passages clearly state that both Mary and the Holy Spirit conceived Jesus Christ.

"This is how the birth of Jesus Christ came about: His mother Mary was pledged to be married to Joseph, but before they came together, she was found to be with child through the Holy Spirit." Matthew 1:18 NIV

"The angel answered, “The Holy Spirit will come upon you, and the power of the Most High will overshadow you. So the holy one to be born will be called the Son of God.” Luke 1:35 NIV
Are these Gnostic images which have found their way into orthodox Christianity depicting Jesus' human mother Mary, or possibly the one who conceived Him, the Holy Spirit? Let's explore some seemingly potential problems with Proverbs 8:12-30.


1.”Wisdom” is referred to as being female. The Holy Spirit is a “he”. Generally the Holy Spirit is referred to as being male in gender, while in Proverbs 8 “Wisdom” is stated to be most definitely female. I believe this to be of little consequence. Few people would seriously argue that God the Father was actually male (or had a gender at all for that matter). God the Father would more truthfully be an entity, or an “it”. However in the English language the word “it” generally implies more that just, neither male nor female, but also suggests an inanimate object, or a lack of personality. The same may be said about the Holy Spirit. It is only with God the Son can a gender most definitely be absolute. Jesus Christ, God the Son, was male.


2.Proverbs 8:22 (“The LORD brought me forth as the first of his works”) strongly suggests that this “wisdom” was a created being, and God the Holy Spirit as part of the Trinity must, by definition, be of the same nature of God – co-existent and eternal. We must once again be very careful with this. By the same argument we can also incorrectly conclude that Jesus Christ was also a created being. The above two verses (Matthew 1:18 and Luke 1:35) clearly say that He would be born, or conceived, or created by both Mary and the Holy Spirit. Therefore Jesus is a created being. The flaw with this logic is our understanding of the word “create”. Many people believe we have the significantly diminished ability of God’s to create because of the fact that we can create life, or have children. However the fact of the matter is that we do not create life or children. We reproduce them. We can build life from previously supplied materials. A baby begins with an egg and a sperm. The mother nourishes and feeds the child through her consumption of food and drink. Absolutely nothing of the child is truly created by us. Even the genetic blueprint in already present and designed. It is only within God’s realm of power does true Creation exist. Only God can create something out of absolutely nothing. God required no building blocks or building materials. Jesus, however, was not a true or spontaneous creation of God. He was not created, but reproduced. He began (physically) as an egg within Mary. His mother feed and nourished Him in her womb. God did not simply will this being into creation and “inhabit” his body. He was actually born into this world. It is in this way that Jesus becomes the unique Son of God. Now this, ultimately, brings us to souls and specifically Jesus’. Are souls truly Created and gifted by God? Although Jesus was born of this world and not created but reproduced, very few would argue that his essence, His soul existed as the divine Logos. It could even be argued that Jesus’ soul was reproduced, being an exact representation of the Father. A perfect image. A perfect reflection. Could the “creation” of “wisdom” being “brought forth as the first of his works” be more correctly an aspect, or reflection of the Father rather than an actual creation? I would believe so.

“For she is the brightness of the everlasting light, the unspotted mirror of the power of God, and the image of his goodness.” Wisdom of Solomon 7: 26 KJV (Apocrypha)

“…kind to man, stedfast, sure, free from care, having all power, [omnipotence] overseeing all things, [a form of omnipresence] and going through all understanding, [omniscience] pure, and most subtil, spirits.” Wisdom of Solomon 7:23 KJV (Apocrypha)

But if Solomon’s “Wisdom” is God the Holy Spirit she must also demonstrate, like all aspects of the Trinity, the attributes of an individual also.


“…and being but one [she is an individual being], she can do all things: [omnipotence] and remaining in herself, she maketh all things new: and in all ages entering into holy souls, she maketh them friends of God, and prophets.” Wisdom of Solomon 7:27 KJV (Apocrypha)

This verse also states that she can and does the same job as the Holy Spirit does (“she maketh all things new: and in all ages entering into holy souls, she maketh them friends of God, and prophets”). She changes people’s hearts – she gives them a new heart – something that God the Son accomplishes.

The only point in question is whether or not Solomon had meant “Wisdom” to be a personification of an idea, or a method of teaching a lesson, or as an actual aspect, or facet of God.