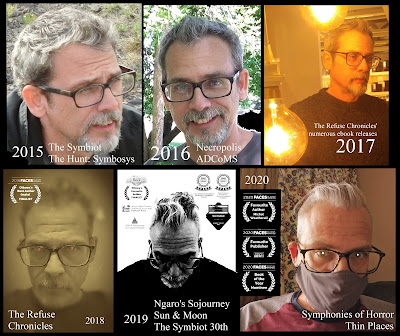 April of 2015 saw the release and publication of The Symbiot, written over 25 years ago, which would also mark the  launch of Broken Keys Publishing, with its logo a rendition of this first book.

The sequel, The Hunt: Symbiosis, had been half written with its complete story mapped out. Finished writing and released in September 2015.


Traction began in 2016 with a letter of acknowledgement from Ottawa Mayor Jim Watson for Michel's contribution to the literary community, followed by an interview of 1310 News' The Carol Anne Meehan Show.


He had worked on two books in 2016: A Dark Corner of My Soul, a collection of dark poetry, released in July, and what was originally planned to be the final book of The Symbiot-trilogy, Necropolis. Although a rough outline had kicked around for the past 20 years, Weatherall struggled with several plot challenges. What solid pieces were written would have amounted to little more than a lengthy epilogue of the previous book. In late January of 2016, while sick with the flu and suffering fevered dreams, it all came together. Necropolis finally being written and published in 2016.


In 2017, slowly piecing together numerous fragments and short stories (that would eventually become The Refuse Chronicles) he focused upon promotions, radio, TV and media, accumulating in the November nomination for the Faces of Ottawa Awards Favourite Male Author for 2018. Appearing on 7 radio shows and TV twice, as well as 4 'meet-the-author' events at local coffee-shops.


2018 saw the completion and publication of The Refuse Chronicles, the finale of The Symbiot-series.  Weatherall kept his focus on exposure, promotion and media presence, which paid off, beginning the journey into becoming a public figure. 2018 saw his first invitation to be a 'celebrity judge' in the Canada Multicultural beauty pageant.


2018 also saw the inception of ARISE: The Rise of the Indie-author, events promoting Ottawa's literary talents.


In 2019, publishing Ngaro's Sojourney, the first book in a new series, Sun & Moon, a collection of poetry chronicling his struggles and experiences through his wife's cancer, and The Symbiot 30th Anniversary, The Nadia Edition.


2019 also saw the return as a 'celebrity judge' for the World Multicultural Festival's beauty pageant.


2020 is seeing the launch of "Symphonies of Horror: Inspirational Tales by H.P. Lovecraft: The Symbiot Appendum" (an added bonus book for those who purchase the entire Symbiot-series) and Thin Places: The Ottawan Anthology, featuring 14 local authors (with 100% of its ebook's proceeds being donated to Shadow Ottawa).


2020 is proving to be interesting considering the pandemic, closure and lockdown of so many necessary services and venues.

He was also nominated for the Best of the Net Award in poetry (This Burden I Bear).


Preliminary work begins on Invasion: Scion, book 2 of his new series, The Fractures-Series.
Posted by 'Seph Sayers at 3:33 AM