The Theological Problem of Worms

It was early in the afternoon the day I went for a walk around my neighbourhood. It had rained heavily during the night and early morning, but the sun was out and shining in its full force. The freshness after a good rainfall had now dried up and that scent of healthy moist earth along with it. Now all I came across was the shriveled bodies of hundreds of worms on the pavement; lifeless dried out husks.
As my eyes were drawn to their bodies I noticed they didn't count in the hundreds, but more like in the thousands. The road was absolutely covered with them.
What a horrible existence. What a horrible life. 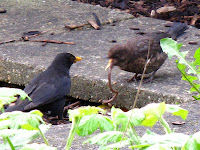 Designed to live and thrive beneath the earth's surface, in the soil; warm and safe. But when the water comes; when the rain falls, they are faced with a terrible decision. Stay in their burrows and drown, or escape to the surface making themselves vulnerable to giant-sized predators. (Although a Red-breasted Robin isn't particularly threatening to us, to a worm they're a monstrosity). Then they must hope to time their entrance into their subterranean safety after the water's subsided but before the sun dries them to death.

Why would a loving God create worms? I can completely understand the need and function worms perform. They are a necessity. But why this horrific choice between drowning and monstrous hunters?

...but I guess this isn't really an important theological question, is it? After all, they're only worms, right?

I can remember the World Trade Center falling in 2001. we still struggle and reel with questions like why? How could so many innocent people, people just like you and me, fall victim to a crime like this? 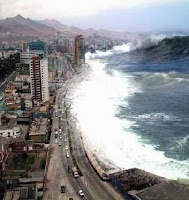 I can remember when the Tsunami hit India in 2004.
We never really ever got an accurate body count but they estimated somewhere around 200,000 people were lost. Swept away. Whole and entire islands, simply gone.


...How can a loving God allow these things to happen? Most especially if we believe nothing in this world happens without God's permission or direction.

I partially believe the problem lies in the fact that we presume God plays favourites towards us humans. Not only that, but we presume God must absolutely be anthropomorphic. “He” is a god of us human beings.

The theological problem of worms is our theological problem.
I believe – at least in part – the answer to these problems lies within out anthropomorphic views (or maybe insistence) of God's nature. Maybe even our belief that God must be personal. Or even a 'person' as we understand the term. (Maybe God is significantly more akin to the idea of what the Tao is?)


To me, I have only come across 3 possible explanations. Atheism, Deism, or Gnosticism. Little else would seem to explain this theological problem of worms.
Posted by 'Seph Sayers at 8:28 AM 1 comment:

"There is no fear in love. But perfect love drives out fear, because fear has to do with punishment. The one who fears is not made perfect in love."


"The Lord is like a father to his children, tender and compassionate to those who fear him."

Some Christians see "fearing God" as a judge or master and tremble in fear of punishment. However with the verses I've quoted this doesn't fit at all, especially 1 John 4:18.

I would say that filial fear really isn't fear at all. It is interesting because if these types of Christians are scared to death of what God thinks of you or what he may do to you to punish, then, as 1 John 4:18 says, "...because fear has to do with punishment. The one who fears is not made perfect in love", makes me wonder about these people. Sounds like this servile fear of God and what He, as a Slave Master, can or will do to you makes one more slaves than children.
This servile fear will spiritually murder you on the inside.
“When we feel the need to be seen to be good, like a frightened child, we will pretend in order to please. Pretense kills more people than cancer”. The Beautiful Life, Bloomsbury, London, 2007, pg. 60 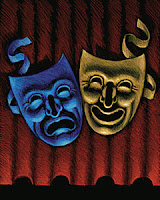 ...and that, I think, is the defining difference between the two. Pretense. Wearing Masks.
Attempting to be something to appease some one, be that someone a social group, congregation, priest or pastor, or even a deified spiritual superman in the sky.
But it is filial fear that I believe is the path to freedom and wisdom. Once we cease fearing punishment and constant reprisals we become free to accept accountability and responsibility. We are no longer dependent upon this deified spiritual superman; in fact, we become free of this idolized anthropomorphic God.
So, what then becomes of wisdom?
Learning how to think rather than what to think. Education over Indoctrination; but not simply the collection and acquisition of Knowledge and Data – that's rote – not much different than indoctrination – but its benevolent, practical, and relational application; Wisdom.
Questioning is not sinful.
Thinking is not being 'Worldly'.
Doubt is not the absence of Faith, but a necessary and healthy composite of it.
(The arrogance needed to deny doubt is simply amazing!)

'From caring comes courage'. We might add that from it also comes wisdom. It's rather significant, we think, that those who have no compassion have no wisdom. Knowledge, yes; cleverness, maybe; wisdom, no. A clever mind is not a heart. Knowledge doesn't really care. Wisdom does”. The Tao of Pooh, by Benjamin Hoff