The Dharma Entanglement: The Doctor-Manhattan-Syndrome

The graphic novel, Watchmen, made Time magazine's list (2005) of All Time 100 Greatest Novels to be read (and the only graphic novel to make the list, alongside the likes of J.R.R. Tolkien's Lord of the Rings, George Orwell's Animal Farm, Margaret Mitchell's Gone with the Wind, and William Golding's Lord of the Flies). Yes, it was also made into a movie in 2009, and a good one at that, but the book is still worth the read!

Watchmen takes place in an alternate universe in which our recent history is re imagined with superheros present (from the 1950's through the Vietnam War up 'til today – with the potential of an American-Soviet doomsday war looming overhead).

Nite Owl (a Batman analogue) who relies upon Owl-themed technology and gadgets.
Silk Spectre (both) were highly trained in hand-to-hand combat and martial arts.
The Comedian was more of a super soldier in the sense of the arsenal of weapons he seemed to enjoy using.
Ozymandias is the zenith of the human potential – using 100% of his brain and having achieved mastery over his mind and body.
Rorschach, a masked vigilante, and nighttime crime fighter whose sense of right and wrong are black-and-white in a gray coloured world. 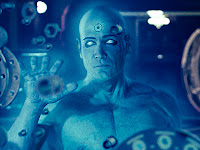 The one commonality we find is that these superheros do not have super powers... and then we have Dr. Manhattan. A glowing blue skinned deity with – as both the character himself and the reader slowly discover – near omnipotent powers.

As Dr. Manhattan's powers grow, the more 'secrets of the universe' he becomes aware of (none of which are openly shared with the reader unfortunately), the more and more distant and disconnected to his fellow human beings he becomes, to the point where he would seem to have not so much achieved Enlightenment, but passed into the realm of becoming a god; Alien and disconnected to the human condition. He can no longer relate and eventually abandons humanity and leaves Earth to pursue what we can only imagine to be his own interests or further enlightenment.


”Let me correct you on a few things... The central message of Buddhism is not "Every man for himself!"”

I call this the Doctor-Manhattan-Syndrome: Buddhism gone terribly wrong.(And let's not kid ourselves. It isn't solely restricted to Buddhism. We've all seen our fair share of the Doctor-Manhattan-Syndrome run amok in Christian circles as well. Who's saved and who isn't and a hedonistic obsession for self-salvation. The other side of this coin is the counterfeit compassion of attempting to 'save others' through prosytlization to the point where either people become projects – dehumanized – or bragging rights to how many people one has 'saved'. But I digress).

The Doctor-Manhattan-Syndrome is an exercise in missing the point, or totally becoming self-serving in our pursuit of (self) enlightenment or (self) salvation.

Interestingly, this "perfected" (if we can really call it that) state of Holistic Solace could be synonymous with what many might mistakenly understand Enlightenment to be. Because alone, it is incomplete and self-serving. This Holistic Solace, this state of "Enlightenment", this Doctor-Manhattan-Syndrome would be lacking in one's ability to discern, absorb, and understand truth and have critical deficiencies in Compassion if not completely separated from it.

The Doctor-Manhattan-Syndrome would be the Buddha's enlightenment under the Bodhi Tree and no more. He would have simply become enlightened and found no need to share this - let alone teach - to anyone else.

I believe when we focus our efforts on improving our mental and spiritual solace(s) alongside striving to find a better and more harmonious physical health, we slowly, surely, and gradually move towards a better and 'higher' soter state. Being 'healed' (salus), but more accurately, being made whole; unified. But these 'stages'; these areas of healing and unification and growth are all inner, private, and personal. By no means must we be perfect in these self-improvement endeavors, but we must be 'whole' enough (soter) to see clearly. We must be 'healed' enough (salus) to reach out and help others.

The-Doctor-Manhattan-Syndrome is when the effort is successful but our vision remains deluded and we can see no need or desire or purpose for compassion. It is an empty enlightenment.


Solace and Compassion are entangled by Dharma.