A Cure for Lust

What do we look to religion for?
Why do we seek it out?

To some, I’m sure, it's in search of the truth. But I've learned 'religious truth' is an ambiguous, fickle, and tricky thing at the best of times, with a tendency to become more subjective and righteous than anything else. (And I would include Atheism within this umbrella, 'religious' definition). To some (I hope a minority) this subjective truth and righteousness, unfortunately, is exactly what they seek.


I should like to believe that we look to Spirituality in hopes of learning and better understanding Compassion towards others and Solace for ourselves. To find peace with the world around us and be at peace with ourselves.


Solace. Although in times past I am sure I would not have been able to successfully articulate it, it was what I've spend decades seeking and searching for.


I have written on how Christianity has failed me, but maybe it was I who have failed Christianity's test. Maybe I have never been baptized by Fire, by the Holy Spirit. Maybe it is I who has never successfully been born again. Baptized through Catholicism but never Confirmed, maybe I truly am not a part of the Body, but apart from it. Maybe at one point in my life the cleansing fires of the Holy Spirit washed over me, measured me, and found me wanting... My point being this isn't about pointing the finger at Christianity but simply that it hasn't 'worked' for me.

I think the three darkest demons I have wrestled and struggled with have been Fear, Anger, and Lust.
Capital “F” Fear. Not so much being scared or afraid of something or someone, but Fear as in Worry, Anxiety, Dread. The kind of worry and fear that consumes your Perpetual Now and obliterates your tomorrow. The kind of fear that controls your ability to make decisions for yourself.

I've never been sure exactly how to label the second; Anger or Rage.
A distinction should be made between righteous anger – anger one feels at an injustice – vs. blind, out of control anger; rage. When rational thought evades you. When it is the anger, the rage that is calling the shots.

I am by no means pretentious and I have no intention to give the false impression that I have successfully and permanently purged them. There are still moments when I battle them. However, I have through my decades of searching, through various 'methodologies' and 'religions' and spiritual paths and avenues found control, peace, and solace. Primarily through – believe it or not – martial arts. (Taekwon-do to be exact. I've written a blog on it. Tattoo: Solace in Pain. And don't kid yourself into believing that a martial art is all about combat and fighting an opponent).

...but Lust is another demon. When I say Lust I am referring to Lust of the sexual kind. (Truth be know, I have never really suffered from coveting material goods and 'stuff').
The church, Catholicism, Christianity, and Christ have in every method and way failed to offer succor. The closest I've come was the realization – or maybe it's better and more accurate for me to say, acceptance, of God, as the Holy Spirit, as most definitely female. “God the Mother”. Sophia. The divine feminine Catholicism sees in the Virgin Mary (not Mariolatry).

Just use your innate ability of Imagination (as opposed to 'make-believe') and pray and confess to a female God. It is a drastically different and refreshing experience.


But even this only succeeded temporarily to suppress Lust, not battle it. 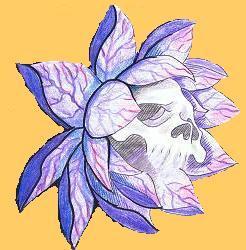 It was only recently, through a serious of coincidences, that I came across a simple Buddhist mediation. A simply Buddhist method of combating Lust that has knocked it flat on its ass. (No, this isn't a story about religious conversion or proselytism. I'd have to definitely be something first to convert to another, wouldn't I?)


It begins by sitting cross legged, preferably on a pillow or something soft. Then, remove “counterproductive currents of energy” or “airs” or “winds”, through 9 inhalations and exhalations.
(I know this part might sound a little bit silly, but bear with me).

Then I conjure an image of a Lustful object of desire. But now, meditate and contemplate on their body, from the top of her head to the soles of her feet. Skin, flesh, blood, bone, marrow, urine, feces, etc. Focus on her hair, but her removed hair, like clumps you might find on a hair salon's floor or in a bathtub's drain. Finger and toe nail clippings. (This isn't for the faint of heart). Then I focus on the body's decaying and decomposing. The soft subtle skin being quite literally stripped from the body through its disintegration. Its liquids spilling out. (I've even had moments when my mind meandered on its own and animated this corpse into some sort of zombie horror)
… and I think you get the idea. Lust is the last thought on your mind. And no, I don't enjoy this, and yes, I find this exercise extremely disturbing. 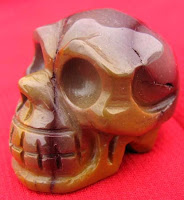 I have since “streamlined” this method over time down to a single simple image. A tiny statue of a skull carved out of stone and I can summon this image into sharp focus in my mind's eye – usually – without going through the meditative process I previously described, if needs be. Its quicker that way; more practical and useful.

I'd be interested in hearing how some of you deal with these issues – Fear, Anger, Lust – or whatever you may struggle with and successful methods.
But please, success stories only. I've heard my fair share of BS over the years, ranging from ”When I get lustful thoughts, I read my bible”, to ”I never suffer from fear or worry since I've been born again”.
… ya... okay.

I like to believe spirituality – like truth – is progressive and cumulative; it grows and evolves and expands. For those of us on this path, it makes us spiritual sojourners.