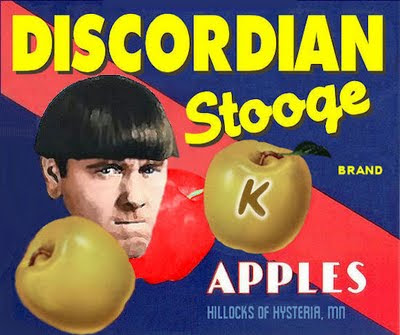 I have long since stopped (or at least attempted to avoid) using certain terms. Postmodernism, postmodernity, pomo, Emergent, the Emergent Church, etc.

To me, I see religion in general as having entered a particular (and dangerous) stage. We no longer live in a world where the religionist can enjoy the luxury of isolation. Cultures have little choice but to meet one another and either embrace or clash. I see this spiritual conflicts as  "A State of Emerge-ncy" . 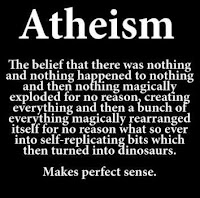 But I wonder if it could very well be some sort of veiled Discordianism. (Although I'm not sure using the word "veiled" is necessary or not. After all, how difficult is it to successfully identify a real Discordian?! Irreligious yet spiritual? And let's not forget, Atheism is itself a Belief-System too).

What I am really curious about, more specifically, isn't whether spiritual postmodernism is or isn't Discordian, but rather whether I am or am not. (Or whether you are or are not). I think I'd have to admit some of my methodologies are. But what's at the core beneath it?

And let's not allow subterfuge to misguide us here. I am not going in a direction that Discordianism is the blight of all things spiritual and, therefore, must absolutely be stopped.
No, not at all. 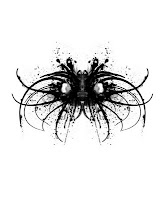 Could holding a belief in a "parody religion" - a deliberate mock or faux religion - be a postmodern approach to religion? More importantly, could this "joke methodology" exercise actually be part of a legitimate path to "enlightenment"?


(And on a completely aside note, I wonder if a parody could be our modern (Sorry! Our postmodern) equivalent to a parable?)
Posted by 'Seph Sayers at 5:04 AM No comments:

Email ThisBlogThis!Share to TwitterShare to FacebookShare to Pinterest
Labels: Postmodernity

Paul so often talks about Grace over the Law. There is an odd and strange tension between the two.

But what concerns me are two things: Firstly, either extreme manifests serious and dangerous issues. Jesus repeatedly and unrelentlessly attacked Legalism because of it's indifference and hard heartedness. But the other end of the spectrum, is a chaotic free for all! The belief that Christ's atonement has been complete and absolute, to the critical point where we no longer carry any accountability. The belief that we have been given free licence to do whatever we want with no consequences. After all, God will forgive us, right? This is Licentious.

My second concern is its effect on dialogue; on how Christians communicate (or miscommunicate) and suffer severe misunderstanding over this issue. We have a dichotomous scale with Legalism at one extreme end and Licentiousness at the other.

Both will warn the other of its potential danger, and rightfully so! Fundamentalism is a move, a shift towards the dangers of Legalism, while the "Emergent Movement" runs the risk of entering into the Licentious. But to point out flaws and errors while not offering any sort of solution or goal is not complaining, but bickering at best, or bitching at worst. Bitching and bickering are not only counterproductive, but also divisive.

I am not content with the cookie-cutter answer of, "we are to try to be like Jesus". Although the answer is true, it is lame, a cop-out, and poorly thought out at best.

Was Jesus a legalist? Absolutely not! Was Jesus given to free licence? No. So are we to believe that Jesus maintained a perfect balance between the two; the exact epicenter; the balance point of this scale?

Many would say, yes, but I would completely disagree. From what I have seen, this "balancing point" is a sellout and a watering down of all truth.

Jesus does not represent 50% Grace + 50% Law. Jesus is 100% Grace and 100% Law. This position does not exist on this dichotomous scale. I've come to the conclusion that this scale is only useful in determining where we begin our journey, but cannot be used to map our journey itself. To move in any direction on this one-dimensional dichotomy represents absolutely no spiritual growth.

This paradigm - especially within ecumenical discussions - must be laid to rest. There is a third option, a third direction in which we all need to focus on and move in. 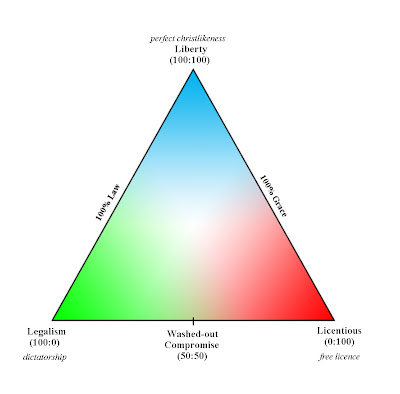 Legalism: Exaltation of law or formula, red tape. Preference of the Law to the gospel, doctrine of justification by works.

We are free to break the Law, but only for the right reasons.

What we really need to be aware of is that this message, this gospel, this good news, this Jesus, is an extremely dangerous one. One that is a threat to nearly every kind of establishment and institutionalism that we know of.

Are we ready to explore what this new avenue means?
Are we prepared to follow his lead?

I don't see this as a perspective or a certain point of view. I would hope this is something we could all collectively agree upon. Namely, that our spiritual maturity, our growth must not be in any sort of horizontal direction on this diagram, but only vertically, only "up"; only towards christlikeness.

It is the clearest it has ever been made to me personally. It seems clear to me this is the core of Christianity, framed in the context of "love thy neighbour".

If I had to trim Christianity down to it's core essentials, I think this would summon it up perfectly in its profoundest simplicity.

If this truly isn't the core of christianity; of God's will, then I'm not sure I want anything to do with it.

Please allow me to give credit when credit's due.
The core idea behind this post was from a friend of mine - a baptism youth minister - on his last and final sermon. You can listen to it here.
Freedom ... free from or free to?
Posted by 'Seph Sayers at 8:13 PM No comments: