A Review of Mark Townsend's “The Path of the Blue Raven”. 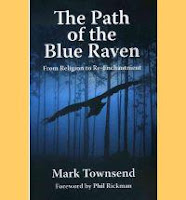 I've decided to go out on the limb with this review, so to speak, in hopes of capturing a certain essence of this book. The author, Mark Townsend is honest - sometimes brutally so - and raw, and it is this that I hope to relate in my choice of quotes.

The picture of the God Mark Townsend has learned to see is simply marvelous! He speaks of Jesus thus,

“It's a marvelously messy and muddled up picture of a 'god who meets us in the shit' – divinely intertwined with the animal muck! How native! How Celtic! How wonderful!

“And what about the wandering preacher's final hours? Well the story tells of a gruesome experience – one load of shit after another. He was betrayed, rejected, beaten, spat upon, humiliated and then killed in the ugliest way possible. And the period between birth and death was not much better. He was misunderstood, called names, chased out of town, viewed with suspicion and cursed with a group of total misfits who kept getting it wrong. This is the god-image who lives in the gutter rather than at the top of the ladder.” (pg. 51)

“... the divine is not separate from us, the divine is not afraid of darkness and messed up humans. The symbolic god-man Jesus shows us how to find the beauty – the hidden treasure – by looking right beneath our feet. If there is one phrase I could use to sum up the glory of the whole Christian gift it is Transfigured Shit. Honest and real spirituality is not primarily concerned with making folk 'good' but 'true'...” (pg. 52)

I cannot count how many times I've heard a Christian tell me that God doesn't change his mind; that God is immutable... yet paradoxically (or maybe hypocritically) they whole-heartedly believe the Crucifixion somehow changed God's mind – that mankind was doomed, wallowing in its damnation – then, because of some sort of satisfied blood lust, changed His mind. Yet this is a good and loving God?! It just doesn't jive. It never did.

“The sacrificial love displayed on the cross does not change God's mind about us(as the so called objective views of the Atonement). The spectacle of the cross changes us not God! How? By displaying costly love rather than brutal judgment.

“If we see Jesus as a literal, perfect offering, a human blood sacrifice, then we have no choice but to view God as wrathful, and who needs his mind changing by having Jesus pay the price for our sins. He dies, we get let off the hook!

“But if we see the symbol of the god-man Jesus hanging on a tree as a selfless act of love, joining humankind at its ugliest, lowest, shittiest place, and not retaliating with any sense of hatred of revenge, than there is more chance of our own view of God being changed. We might even fall in love with such a loving God rather than being terrified of Him”. (pg. 79)

This book at first struck me as meandering and without a direction, until I realized the journey itself was the direction. That I had been conditioned over countless books and authors to expect to be preached to, expecting to be told how things are. It was a forgone conclusion that I was going to be told what to think. I was pleasantly surprised.

Interestingly enough the last person I met who gave me “permission” to question, explore, and grow was a baptist youth minister who has since left ministry. (Never my pastor, but always my good friend). 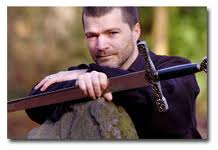 Now I've “met” Mark Townsend, a Church of England priest who also has left ministry. Mark Townsend, through “The Path of the Blue Raven” also gives this same sort of “permission” to question, explore, and grow in our spirituality. But he does more than just this. It is an invitation and a fearless one full of innocence and absolute wonder of a truly jaw-dropping God! It is refreshing, comical at times, painful at others, and always truthful. Mark seems to demonstrate little fear with leaving himself transparent and vulnerable. There are numerous moments when I felt he was telling my story, so closely I could relate.

Definitely a book worth the read!
Posted by 'Seph Sayers at 5:06 PM