Human Resources and the Pursuit of Empire

Although I understand the term, I have always hated it. It more than suggests that people are a resource to be used - and when no longer needed - discarded.

I also hate companies who make the claim that they are like “a big family.” Families don't lay-off family members. Cut the pretension. Call it what it is.

From this world-view people are little more than a resource pool to feed the needs of economics and industry. Sadly, it may be true, whether I like it or not.

In today's world there is a limited pool of 'resources' available. And let's be honest here; to the modern day church, people are seen as a resource. They draw from the same pool and ultimately accomplish one thing only. Intentionally or not, they only further divide the church into smaller and smaller splinters. The direction the modern day church is headed in is “The Church of Me”; total individuality. 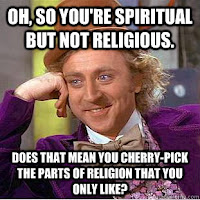 Ironically, it is a position the church condemns many “Spiritual-but-not-Religious” people of being guilty of.


What we have here is the Religion of the Institutional Church.

These two Sacred Cows – Sabbath Observation and Tithing - are absolutely untouchable. However, membership and church attendance has been and continues to drop. They know they are dying.

From my observations, this gives birth to two types of reactions. There are those out there – I'd hate to say spiritual predators because it sounds so harsh – who would take this opportunity to create their own little churches and communities (only quickening its demise), and there is the Religion of the Institutional Church who know something needs to be done but aren't sure what.

Ultimately, they will state a revival is needed - a much needed revolution is at hand! What they attempt to do however, is repackage and re-market the same old religion (with its two Sacred Cows). (New wine into old wine skins?)

(Unfortunately, I am going to be naming names and taking numbers). Of the numerous book reviews I have done over the years, John Crowder's “Seven Spirits Burning” and “Mystical Union”, Jay Bakker's “Fall to Grace”, and Andrew Farley's “The Naked Gospel” are all indicative of this; the business of Repackaging.

It is interesting that so many people turn to religion hoping to find succor  emancipation, and freedom. It's also interesting what the word 'religion' means.


“The literal meaning of the word religion is, ironically, “to return to bondage.” This word comes from two words, the prefix re meaning “to return”, and the root legare meaning “to bind”. Since everyone wants freedom, and many turn to religion to find it, the regrettable consequence is that often they get greater enslavement”. Steve McSwain's "The Enoch Factor", Smyth & Helwys Publishing, 2010, pg. 45

I think the one question that the Religion of the Institutional Church feels so desperately needs to be answered is the wrong question.
How do we save the church?

Although I cannot say the following authors or their books hold this position, they are definitely looking in the right direction. Aaron D. Taylor's “Alone with a Jihadist” and Steve McSwain's “The Enoch Factor” are good examples. Even Matt Mikalatos' “Imaginary Jesus” because it speaks of truths through fiction.

I happen to agree with the Dalai Lama when he said, “Until there is peace among the religions of the world, there will be no peace in the world”.

There cannot be peace among the world's religions when some are so focused on proselyting, membership, building numbers, and – ultimately - dreams of empire.

I don't even think these are the correct questions.
I think Steve McSwain might have put it best,

“I feel more strongly today than ever that the future of humanity is at stake. Unless there are profound changes in human consciousness – that is, changes in how we look at each other and how we treat each other, there is little hope for humanity's survival.”Steve McSwain's "The Enoch Factor", Smyth & Helwys Publishing, 2010, pg. 44