The Paths We Walk

Fear or concern for a lack for resources for our continued survival drives us towards community or tribalism. Whether individuals or corporate entities, all begin from this position.

One is a legitimate concern for a lack for resources for continued survival. This ultimately will lead to co-dependence and build Community. The belief that our pooled resources are more valued than our individual resources.

There is a difference between fear and concern, but in this early stage they are difficult in not impossibly to differentiate. Early on, I am sure both are true to some degree. It only becomes important when a direction of growth occurs. Either one can easily morph into the other in these early formative stages. But ultimately once their footing is established they will develop along distinctively difference paths. 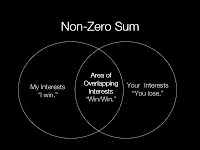 A legitimate concern for a lack of resources necessary for continued survival will build Community. This kind of social structure will eventually begin non-zero-sum thinking. It will also see the introduction of a limited or conditional compassion. This is important because, further down the road, there's the potential for the birth of true Compassion. 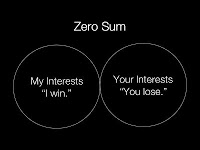 A perceived fear of a lack of resources (or simply a desire for a surplus) will breed Tribalism. This kind of social structure views the world in zero-sum terms. It has no choice but to develop Envy. Not only coveting what another has (whether an individual or rival tribe) but believing the other's loss is somehow their gain.

It is important to understand that we are redefining the terms Community and Tribalism here to identify two separate paths of development. These paths can and do apply to individuals, institutions, and corporate entities.

But it is critically important that we pause for a moment and thoroughly understand what is meant by "resources".

Yes, most definitely "resources" can mean food & shelter. But it can also include safety & security, affection & love. Even a newborn baby finds itself in this position of 'being driven by fear and/or concern for a lack of resources towards community or tribalism'. Its mother's milk and safety and warmth & affection are the baby's "resources". Its community or tribe can be its mother's relationship and family. It can live in community with its siblings, or it can live in tribal competition with them.

But "resources" can be expanded to include a great many things. Resources can be anything needed - or perceived to be needed - for continued survival. For example, from a religious industry point of view, Salvation could meet these criteria. After all, by this thinking, Salvation is needed for "continued survival". And if this resource is mistaken for a commodity (power), we are led well into Tribalism.

Continuing along this path from Tribalism and its zero-sum mindset, there is no other direction for development but eventually to embrace Envy. And as mentioned earlier, Envy not only allows oneself to justify why they deserve what another has, it also can allow them to rationalize why the other doesn't even deserve what it has. Envy is created by Fear and breeds hatred.

But the individual or group/institute/entity/etc. is not yet without hope. At some point - whether directly or indirectly - they will be forced to face the fact that this Envy is at their heart or center. It is at this point where Confusion enters.

Although existing in a state of Confusion is not good or healthy, there is at least the potential for change and growth.

It is at this point where two paths emerge.

One path (Reflection) reverses its direction. It identifies the unfounded Fear that initially created its tribalism, accepts the truth for what it is ("Dharma"), purges its Envy and Fear, and undoes it. It learns and grows and evolves in a more positive and healthy direction.

In its alternate path (Denial) it continues in its Confusion, in denial of the truth. It attempts to justify and keep its Envy. It will delude itself into believing in a mock-compassion in order to perpetuate the illusion of community; this mock-compassion being really little more than Pity. In reality it practices Pity and Envy but convinces itself that it is Compassion and Righteousness.

At this point their ability to lie to themselves is well established; they have believed their own lies and non-truths. They have entered an existence of Delusion.

Delusion, Envy, and Fear are the key operative demons, with each solidifying and strengthening the other. It is a difficult position to escape from, primarily because there is no desire to escape. Its defense is to have convinced itself that it is right and correct - no change is needed. (On a side note, I think this is what ails modern day Christianity. It has evolved down this path of Tribalism under the disguise of "Community". It has mistakenly justified its Pity as Compassion and Envy as Righteousness. Where it should have followed another path...)

These are the paths to Entrapment. These are the warnings we must be aware of and mindful of. But what is a better path? What is it that we should strive for?

Once we can find ourselves able to Reflect is the turning point.
It is the escape from a state of Confusion.
It is the beginning of the end of being Ego-centric.
It is at this point that we self-question, self-analyze, and when Doubt enters.
Contrary to much religious thought, Doubt is anything but a lack of faith. Doubt is hope. Doubt is the beginning of spiritual growth. It is the prerequisite to approaching The Mu Portal.  Without Doubt we cannot self-assess.
Once we can begin to purge our competitive habits - our Envy, Fear, Delusions - once we can clear the Confusion and abandon our Tribal zero-sum thinking and begin embracing true Compassion, "Dharma", and begin finding Solace for ourselves are we on a healthy and spiritually enriching path - not only for ourselves, but for all those around us.

This confusing and seemingly meandering path applies to everyone and everything. Whether they are individual beings, organized institutions, religions, businesses, social groups, or corporate entities. The paths we walk apply to our internal, individual journeys, as well as to how our communities function and grow or stagnate.
Only if we are aware of the paths we walk, do we have any hope to effect their directions.