Review of The Naked Gospel, by Andrew Farley

For starters – on a very simplistic level – this book's laid out very well with chapters that are easily read within short, manageable time periods. 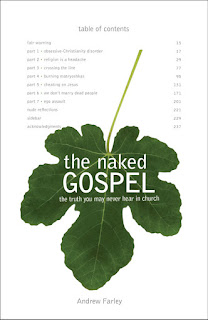 I'm very mixed on this book though. I found myself 'suspicious' at times, more often in the first half. I don't believe this was due to any sort of apprehension or hesitancy with the author Andrew Farley's ideas. I think more because he seems to walk a line between Churchianity and a Christianity that's free from an Institutionalized church.

I was quite happy to see, in chapter 7, how heavily he focused on the fact that the Law breeds sin, arouses sinful passion, and is a ministry of condemnation; that the Christian who believes they are bound to the Law have missed the point. That Christian cannot and should not mix the two.

[But on a side note, he does seem to confuse Moses' ministry of condemnation with the entire bible at times, stating, ”Once enlightened by the Scriptures, we also agree that we're born in a sinful condition.”, pg. 98]

But this angle isn't new. Countless churches and sermons and pastors have spoken on this issue. What impressed me was, in chapter 9, the author takes it a necessary step further – takes it to the street, so to speak, and applies it to the Institutional Church's Holy of Holies. Sabbath Observance and Tithing; membership and money.

This caught my attention, as I have pondered and questioned some of these exact same issues in Repairing the Torn Veil

...but it was also at this point where I think he dropped the ball. He never really conclusively addressed this issues of Sabbath Observance or Tithing; or the implication it would have on the future church.

The overall impression I got was that we are free of the Law and how we cannot pick and choose which laws to observe or be free of (”The law is an all-or-nothing system”, pg. 65), but yet, - somehow – in some unspoken and elusive way, Sabbath Observation (read in, Going to Church) and Tithing (revenue stream) still count.

I'd like to learn more about Andrew Farley. I believe he is being honest and genuine in The Naked Gospel, please don't misunderstand me. However, I can't help but feel like this is a Conservative Evangelical Christian (pastor?) attempting to repackage and remarket the same old religion.

When I say Conservative Evangelical I suppose I really mean biblical literalist. There are certain statements that quietly presume this.

”If we accept God's blood-only economy... blood sacrifice is the only action that results in forgiveness and cleansing. This was true in the Old Testament and there's no exception today”, pg. 135

”We believe that a flood engulfed the earth and that a man spend 3 days in a big fish. To top it off, we believe Jesus rose from the dead and then floated up into the sky amidst many onlookers. What crazy events we've chosen to swallow as truth!”, pg. 128


Well... you pretty much need to be a literalist to choose to swallow some of these events as fact. And God's economy of blood doesn't resonate very well with the more Liberal minded. Which leads me to seriously wonder, who exactly is this book aimed at?

The author tends to fall victim to speaking in Christianese; words and terms that only Christians or church-goes would readily identify and recognized. Yet he leaves these terms hanging; never retracing his steps to flesh out what they mean; I suspect deliberately allowing his reader to assume. Yet, if the initiated and experienced church-goer is the target, he shakes them up by stating,

”...[these] requirements to remain in God's favor. This collection of “Thou Shalts” - read your Bible, share your faith, participate in a lot of “church” - was a measuring stick... criteria served as a concrete way of determining whether or not I was in right relationship with God”, pg. 81


...are unnecessary, or even wrong.

In the latter half of The Naked Gospel he seems to then swing to a near Universalist perspective. How else can we take this?

Jesus' blood sacrifice on the cross was the once and for all blood sacrifice. He speaks of the priests of the Old Testament having to stand, (signifying that their job of attempting to repent and cleanse sin is never done), vs. the singular Priest (Jesus) of the New Testament sitting at the right hand of God because that job is now and forever finished.

Then he would seem to turn on the traditional Conservative Evangelical position when he states,

”... they delicately dance around the reality of once-for-all forgiveness and push the idea of a two-tiered forgiveness system in which eternally God is satisfied, but right now we somehow maintain our own daily cleansing...”, pg. 150


”... we rest by ceasing from the dead works we thought would gain us favor with God. Rather than performing religious acrobatics to rid ourselves of sins, we can sit down with Jesus. We can simply agree, “Yes, it's finished”.”, pg. 66

The Law of condemnation has been decimated by Grace... and Grace is unconditional. Conditional Grace is no Grace at all.

Half of the endeavor is getting to this point – which I believe is this book's agenda. But this is only half-way. Where do we go from here and what does this liberty look like is a necessary follow-up. To continue with religion and church as is, is the empty practice of repackaging and remarketing an old and defunct religion. Putting new wine in old wineskins.

… and I'm afraid this book fails to deliver this second stage in the equation. Maybe it was never meant to. I'm concerned this is a new fangled way of revitalizing stagnant church members while pitching what, on the surface, appears to be something New, appealing to and drawing in the masses of spiritually mindful people done with church; but all for the intent of renewing membership and increasing revenue. I sincerely hope it isn't just a repackaged religiosity. I hope it will give its readers food for thought, challenge them to revisit presumed theological positions, and hopefully and legitimately ask the question,