Review of The Gospel You've Never Heard by David Rudel

I'm going to approach this particular book review, as I was invited to, by a comparison with Andrew Farley's ”The Naked Gospel”

Where I was suspicious of Andrew Farley's ”The Naked Gospel's” intent (fearing that the author may have been a Conservative Evangelical Christian with a subterfuge agenda of repackaging and remarketing the same old religion) this suspicion and accusation absolutely cannot be made of David Rudel's ”The Gospel You've Never Heard”. He leaves little to the imagination when he expresses the hope ”...to break the hegemony [of the] evangelicals”, pg. 170. He also goes on the clarify that by “evangelicals” he means “Conservative Evangelicals”, recognizing and apologizing for any overgeneralizations (pg. 7), then goes full-steam ahead.

Where in Andrew Farley's ”The Naked Gospel” I had asked ”who exactly is this book aimed at?”, David Rudel's answers point-blank. ”I've tried to make the book meaningful to evangelicals, liberal Christians, and non-believers.” (pg. 2). 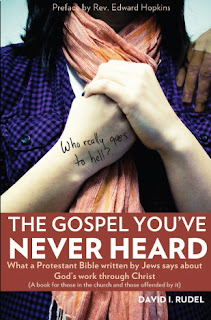 Although ”The Gospel You've Never Heard” by David Rudel is a man after my own heart – namely biblically and theologically 'gunning' down the Conservative Evangelical – I have to wonder whether this is a good or healthy position to begin with. I mean, wouldn't it seem like little more than a debate or rebuke against a preexisting position; a contradicting shadow against another's position? But once this book is gotten into I've found very little evidence to support this concern. If anything, this apparent anti-Conservative-Evangelical angle is little more than a segue to enter David Rudel's topic at hand.

Having said this, maybe comparing this book to Andrew Farley's ”The Naked Gospel” isn't such a good idea. I'm going to inevitably paint a picture otherwise! But Andrew Farley makes some pretty flawed statements (presented as facts) and leaves himself wide open. He states, ”If we accept God's blood-only economy... blood sacrifice is the only action that results in forgiveness and cleansing. This was true in the Old Testament and there's no exception today.” Andrew Farley, The Naked Gospel, pg. 135.

Well... if you, my gentle reader, will allow me to use this expression, David Rudel tears him a new one on page 160 in ”The Gospel You've Never Heard”.

He begins by addressing the defining differences between expiation and propitiation.

He then (I believe somewhat comically) cites and example of ”When God relented of the wrath in store for Nineveh (Jonah 3:10), the Almighty didn't have to blow up one of Jupiter's moons to exhaust the pent-up anger”. pg. 163.

Once again, David Rudel cannot be accused of speaking in Christianese (as Andrew Farley has). He is using certain terms and terminology, but clearly defines them.

Andrew Farley's ”The Naked Gospel” previous quoter's point being that sacrifices have always been and must always be of blood and that ”Jesus' blood sacrifice on the cross was the once and for all blood sacrifice” provides the appeasement of God's wrath now becomes, at the very least, questionable.

Now add to that the numerous biblical examples Rudel provides of non-blood sacrifices.

Exodus 30:15 made through silver. Numbers 16:46 made through incense. Numbers 31:50 through jewelry. Lev. 5:13, Exo. 32:30, Numbers 8:21, 2 Chronicles 30:18. (He even offers the possibility of sacrifices being for a purpose other than expiation or propitiation, ”...passages like Leviticus 19:20-22 suggest the guilt offerings were actually the punishment itself. Rather than a bribe or payoff of God, the sacrifice is more like a fine designed to deter sin”., pg. 162)

Let me just finish off my comparisons between these two books. Andrew Farley's ”The Naked Gospel” at approximately 70,000 words put me past my 'allowed' time frame of 30 days to read and write a review on, while David Rudel's ”The Gospel You've Never Heard”, at over 85,000 words (estimate) took about 12 days.

What's interesting is that I – personally – like Andrew Farley's “gospel” (not book) better. It's a truth I would prefer. David Rudel's “gospel” (again, not book) isn't as attractive to me, but more convincing.

This book addresses difficult issues that I know I have (and continue to ) struggle with. The author identifies apparent conflicts between Old Testament and New Testaments. He identifies apparent conflicts between the teachings of Jesus and Paul. He attempts to broach these difficult issues by redefining our understanding of salvation and judgment and presenting the possibility that these two issues may not be intrinsically linked, but separate issues.

He presents the idea that “salvation” be something less juvenile and more mature than simply making it to Heaven, or avoiding Hell; both somewhat spiritually hedonistic endeavors!

One of the most memorable (and continuing to echo in my conscious) questions he asks is, ”What gospel can Christ and His apostles preach if Jesus forbids them to tell anyone He was the Christ, and His disciples do not realize He is going to die after He tells them in private?” pg. 98. It would seem to very strongly suggest the gospel has nothing to do with Judgment or post-Judgment “bliss” (heaven).

In Dead Off-Center I voiced a view and a concern about an option outside of either the Law-only or Grace-only dichotomy. Andrew Farley's ”The Naked Gospel” does little to explore these concerns, but really – more or less – confirms this dichotomy. David Rudel's ”The Gospel You've Never Heard”, however, seems to identify with my similar concerns. He gives a great analogy – a parable perhaps – of three artists in Budapest running orphanages for artistically talented children (pg. 77-79) demonstrating there are other options than legalism or licentiousness.

This book also brought to light a challenge for me. Although I had said I agreed with Andrew Farley's ”The Naked Gospel's” point regarding the Law of Sabbath Observance and Tithing (calling it the church's modern day Membership and Revenue Stream) as relating to the (now defunct) priesthood of the Old Testament times. However, this does not and cannot “write-off” all observation of Mosaic-law. This does not give us carte-blanc to become antinomian.

This is not the abandonment of Mosaic-law...


”Christians marginalize these laws because we, quite frankly, don't like being told what to do and feel we deserve more from God than a list of rules. Furthermore, there is an unfounded idea that the revelation of God in the Old Testament is somehow no longer applicable.” pg. 113

...but simply not the abuse of it:


”Christians often suggest the Jews erred by focusing on the Law. But the problem was not that the Jews were too focused on the Law. (It is hard to say what else they could have focused on!) The problem was that their leaders abused scripture to give themselves political power. They warped the Torah to their own devices by selectively picking which scripture to emphasize and which interpretation they liked – the Christian church arising afterward did the same.” pg. 113

If forces me to at least question my own motives. Do I use the defunct Tithing “law” to possibly justify not helping the poor, or orphan, or widows? I can only hope not!

We underestimate the Torah.
”The Gospel You've Never Heard's” good news is a people-orientated one. It has precious little to do with the hedonistic and gnostic Heaven of eternal bliss of the Afterlife.
This gospel is much more practical and one of live and caring for your fellow man.
Posted by 'Seph Sayers at 11:54 AM